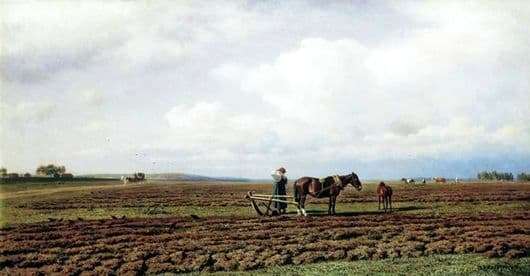 Mikhail Klodt wrote “On Arable Land” in 1872, which became a key work in the landscape painter.

The painting depicts endless open fields during plowing. The plain, which only in the distance passes into the forest and small hills, causes delight, and the realism of the painting is just on the verge of photography.

The largest element of the painting is a peasant who plows the land with the help of a horse harnessed to a plow. She suspended her work and looks towards the road. Her attention was attracted by the approaching carriage, galloping on two horses. On the other side of the picture, a little further in relation to the girl than the carriage, another peasant woman and a farmer plow the land with horses. Both the chaise and the plowing peasants fit so well into the composition of the painting that it is difficult for us to imagine it without them.

The expressiveness of the picture gives the high sky, which occupies more than half of the landscape. Huge bright clouds, the difference in shades of the sky between the different halves of the picture, as well as the faint birds flying against its background, give even more grandeur to this work.

It is worth noting how carefully Klodt treats the details of the picture. On it we will see a lot of crows who have sat down on arable land, and detailed elements of even the smallest sizes, and a gentleman sitting in a carriage.

The painting “On Arable Land” is called a pearl, one of the best examples of the Russian landscape and the best painting by Savrasov. Seeing her at one of the traveling exhibitions, Tretyakov spoke positively about her in a letter to Kramskoy. And now, for more than a hundred years, it has been kept in the Tretyakov Gallery, and copies of this picture have always been distributed in huge editions in very different forms. Klodt himself created reproductions of his paintings for Russian museums three times. The people in this work were attracted and attracted not only by the grandeur and epic of the landscape, but also by their proximity to the people, the Russian land. After all, Mikhail Konstantinovich always saw in them the basis of all Russian existence.