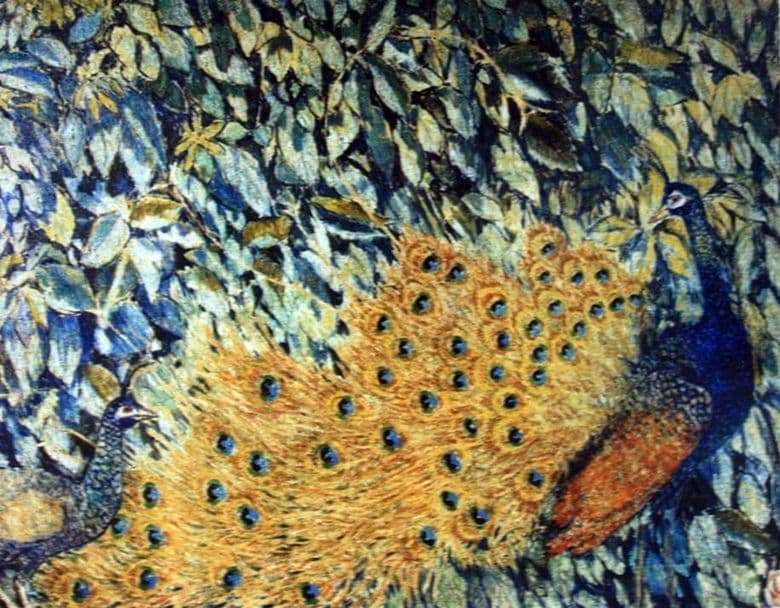 Larionov in various years were created diverse versions of the image of the peacock. The canvas, written in 1908 and located in the Museum of Fine Arts in Omsk, is deliberately decorative, it is made in the exemplary traditions of art-nuovo style with its characteristic features. In the picture, the author interprets the artistic language of popular popular print.

The picture is distinguished from other versions by a surprisingly calm calm subtle coloring. It depicts a bird that has half spread its gorgeous tail, written in golden yellow tones. Bright blue spots resembling eyes are highlighted on the tips of the feathers. Her body is of the same blue tint, only the wings have a warm brownish color. Peacock gracefully turned the miniature head back, as if admiring his plumage.

For a long time, the image of a peacock has been endowed with symbolic meaning based on its outward unusualness – the shape and coloring of the tail, gait, and behavior. He was endowed with mythological qualities related to the theme of the sun, the paradise tree of life, fertility, abundance, even immortality. These qualities of the royal bird and beats the artist in his work.

The figure of the bird, which occupies most of the canvas, is located against the background of a bush painted with unusual tones. Illumination dictates the transition of colors from the numerous shades of green (with reflections of yellowish light on the leaves) in the upper right corner of the canvas to the blue-blue foliage from the left edge of the picture, which seems highlighted by a special light. The transformation of color makes a striking impression on the inexperienced spectator, immersing him in the peculiarity of the Larion style, in which the artist perceives the form as a reflection of the rays transmitted on the canvas by means of colored lines.