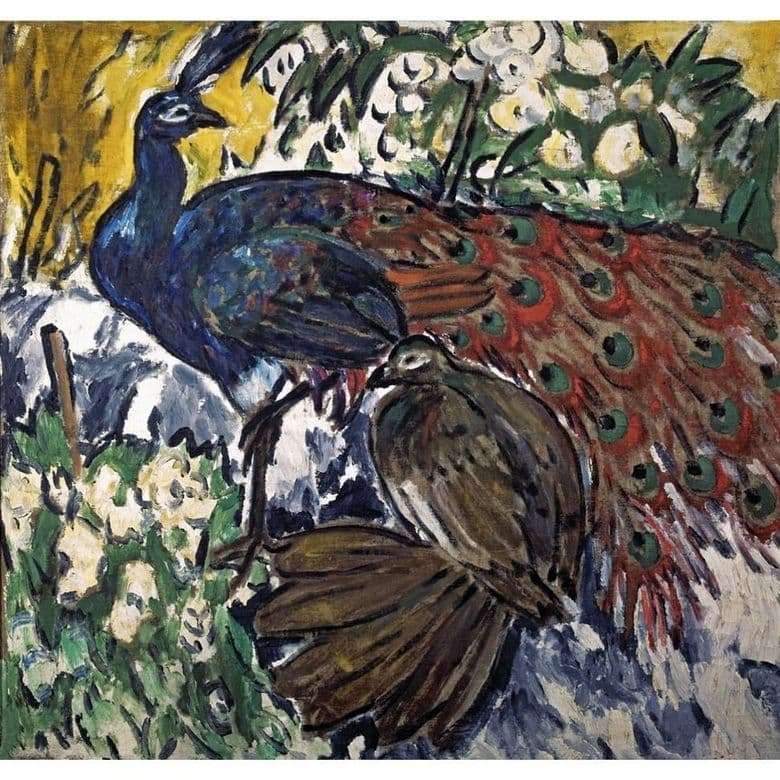 Cloth “Peacocks” belongs to the early stage of the artist. It is made in a modernist style, but contains elements of classic elegance and sophistication. The picture with its restrained mean color recalls a sketch from nature. The artist deliberately emphasizes the natural presence of the royal birds in natural conditions, placing them in the garden among flowers. However, the author still highlights the intentional decorative elements of the image.

Two birds – male and female – occupy most of the web. One of them, sitting in the foreground with folded wings, was discharged in an absolutely nondescript grayish-green color. But the second one, which looks truly regal – at the expense of a tuft on a crown-like head – makes an impression, despite its calmly folded tail, the beauty of which it does not even intend to boast. The tail plumage is depicted by careless strokes in warm brown tones, shaded by lines of a brick shade with a sprinkle of green eyes with black spots. The body and head with a tuft, elegantly turned back on a graceful high neck, set off the blue color of the canvas, creating the impression of fantasy and exotic.

Peacocks do not look outlandish and unusual, almost fantastic, as they are found in real life. Birds are identified by plants, among which the painter has arranged them: bird’s legs resemble twigs, which support flower bushes, or flower stems. White flowers and greenery, among which peacocks are located, are written with indistinct strokes, however, they are a contrasting background for them, underlined by yellowish highlights of the light at the upper corners of the picture.

Primitivism of the canvas is particularly attractive. Spectacular picturesque birds are a definite sign in the composition of the picture and give it a unique expressiveness.