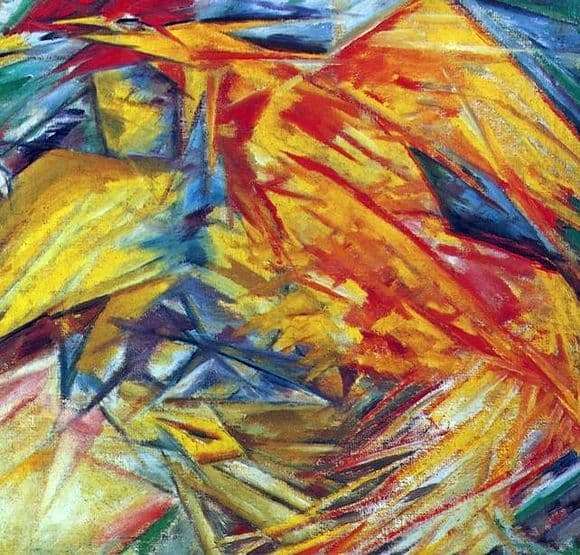 Artist Mikhail Larionov was a bright, optimistic and extraordinary man. He perceived reality under his special look and complex perspective. This was manifested both in life and in his creative fantasies.

At the beginning of the last century, he was very fascinated by the theory of Luchism, with which he soon shined a teaching brochure. This is a way to image objects using direct bright rays. In their intersection, they are able to form certain forms in the perception of the viewer.

Inspired by this idea, the painter created an entire exhibition of his works, written in a similar extravagant style. The most successful of them can be called the picture “Rooster and Chicken”, written in 1912. It defies the usual laws of painting and objectivity, but rather is built on a subtle play of colors and lines, skillfully calculated by the hand of a master.

This canvas is dominated by bright shades of red and yellow colors. With the help of them and drawn figures of a rooster and chicken. Most of the canvas is occupied by the rooster. Its wings are widely melted, it makes the image expressive and dynamic. The feathered tail, like a fiery plume flying behind a comet, develops behind it.

The hen can be seen in the rays located at the bottom of the picture. Only her beak and neck are clearly visible, each spectator can imagine the position of her body in her own way. The background for them are stripes of cool blue and lilac shades. Perhaps they symbolize the sky at sunset.

The period of creative development of Mikhail Larionov ended precisely with radiant compositions. In them, he found his philosophy and was able to embody the most daring and avant-garde designs. He can be called a pioneer and innovator among Russian artists of the time.

Thanks to his unique manner of execution, the painter found his followers not only in Russia, but also abroad.