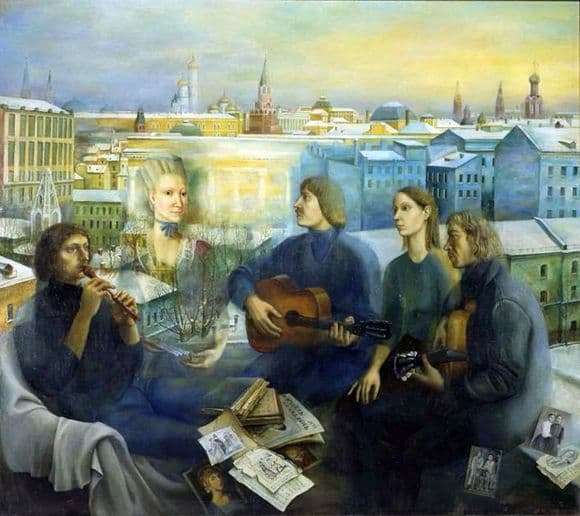 Tatyana Nazarenko is one of the artists at the turn of the epochs, who worked during the Soviet Union, and successfully transferred her gift as a banner to modern Russia. Her paintings, as a rule, are plotted, or they depict people.

The perspective in them is often broken, the characters who should not collide, are in the same place at the same time.

“Moscow evening” among them is actually a reference. It depicts the artist’s friends – young, gathered in her workshop. Two guitars, a flute, a clear female voice, they sing together and stand behind them, instead of the stuffy and oppressive walls of the room, the living space of Moscow. One can see the towers of the Kremlin, the domes of the Cathedral Square, the old, cozy houses of the tsarist buildings.

On the table in front of friends – paper of different eras. Old photos taken from an old album can be disassembled, for which solemn strangers look at the frame sternly and strictly. Numbers of magazines that have not been published for many years, sketches by someone’s light hand, a portrait of a serf, which few people already recognize. The epochs are intertwined – behind the young people there is a vague, thin, surreal portrait of Elizaveta Petrovna Charevina, written once by Grigory Ostrovsky.

The old woman looks from within her own “nowhere”, the tie of the times, which divides her and the society gathered in the workshop, and looks at the same time detached and material, one of all, equal among friends who are separated from her for almost two centuries.

This picture is about the inevitability of time, about the inexorability of his move, and at the same time how easily and freely human thought can overcome it. How easily people stand behind the times they did not find, and how close these times sometimes seem – in old books, in buildings that are several centuries old, in papers, romances and thoughts.