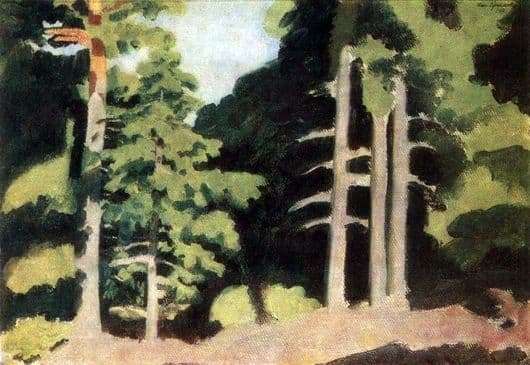 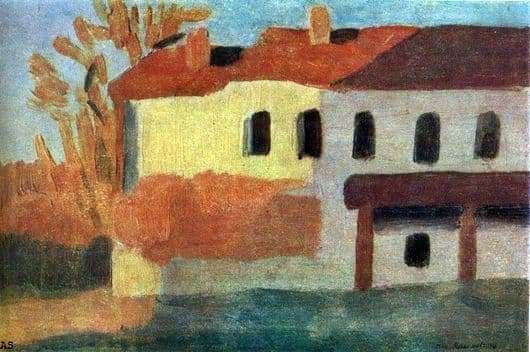 Nikolai Krymov is a Russian artist who for a long time tried to form his own creative style, and with time he succeeded. He became a true expert in the field of landscapes. Krymov loved to depict nature, and also always vehemently defended it, the works of IA Kuindzhi strongly influenced the artist’s work.

The work “Etude” was written in 1917, when the author had not yet formed his own style, a year later, he wrote another work of the same name, but depicted a completely different picture.

In 1917, the author depicted in his picture part of the forest, which is depicted through the prism of the artist’s fantasy, the top of the tree on the left side of the picture resembles something a giraffe, which indicates some illogicality, it is clear that the artist is searching for himself, but he already knows the direction in which

he it will work and this is nature.

The painting, which was painted in 1918, as will become clear later, is very characteristic of Krymov, there is already a hidden meaning here, the artist has depicted a burning house in the city, which the fire gradually takes hold of. The picture is divided into two distinct parts, which are divided by different colors.

In his paintings he tries to convey the emotions that he felt at the sight of various phenomena of nature. These studies are only the basis for future works of the artist, most of these works will be devoted to the seasons, natural phenomena, incredible landscapes, which can be seen only in the Russian outback, in distant villages.

Krymov expands the concept of the “beauty of nature” to the viewer by demonstrating in his works that even the most ordinary phenomena in nature can be incredibly beautiful and cause a lot of positive emotions in a person. Real beauty in simple things, it is not necessary to look for it beyond the distant seas, beauty should be able to be felt on your own land.