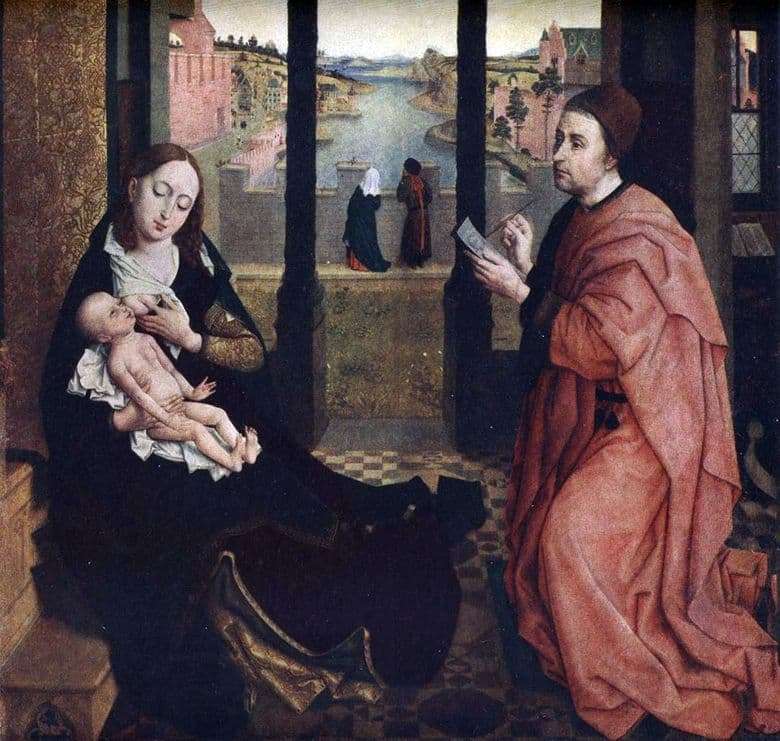 St. Luke, painting the Madonna is a great picture, painted in oil on an oak panel. Its author is considered to be the Dutch artist Rogier van der Weyden, who created a masterpiece between 1435 and 1440. The painting, located in the Boston Museum of Fine Arts, depicts Luke the Evangelist, patron of all artists, painting the Virgin Mary, nursing baby Jesus.

The figures are placed in a refined interior, the window overlooks the river flowing through the city. Among the numerous iconographic symbols depicted in the picture, a closed garden is easily guessed, and figures resembling Adam and Eve.

The works of Jan Van Eyck greatly influenced the work of Van der Weyden, and the picture very much resembles Madonna of Burgundy Chancellor Nicolas Rolen, written by him in 1434. The position and color tones that paint the figures change to the opposite, unlike the work of Van Eyck, and St. Luke occupies a central place – his face is perceived, in fact, as a self-portrait by van der Weyden. There are three more versions of the picture. They are located in the St. Petersburg Hermitage, the Munich Pinakothek, and the Groningemmuseum in the Belgian city of Bruges. The Boston painting is recognized as original, but it is in a rather poor condition, receiving significant damage, which remains despite the extensive restoration and cleaning of the canvas.

The historical significance of the painting is based on the magnificent visual arts, as well as on the rare for this era image of the merging of the earthly and divine kingdoms. The artist in the act of fine art is located in the same space as the Holy Madonna, so van der Weyden is one of the first to highlight the role of artistic creation in the XV century society.