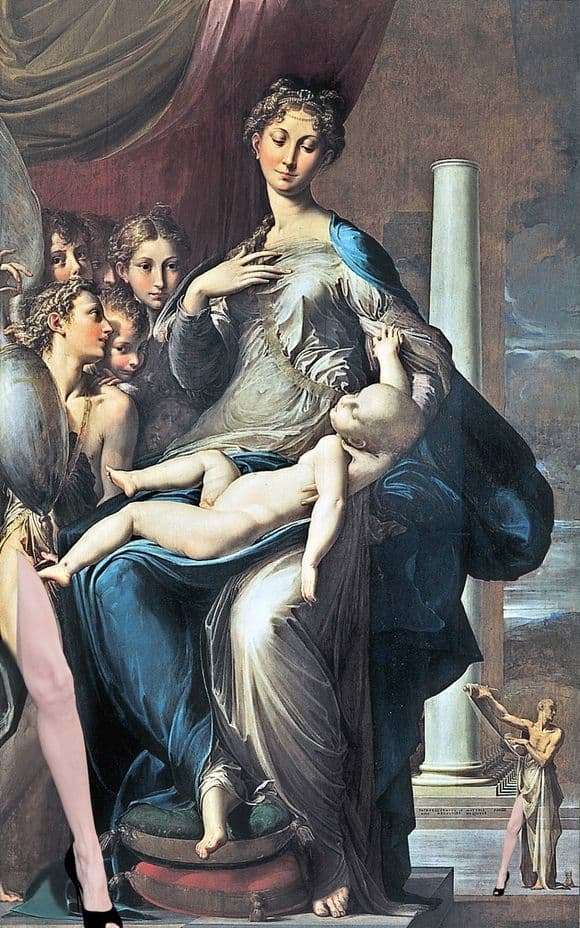 “Madonna with a long neck” is far from both academic and iconographic canons. In fact, she opposes all canons. On it, Maria holds in her arms the baBy A sleeping baby, Christ, but the color of his body and how relaxed it bends looks as if the baby is dead or is sleeping in a lethargic dream. This was done intentionally, with a hint of future death – a theme that does not bypass a single image of Mary and the baby. The Virgin Mary is dressed in unexpectedly rich clothes.

Her blond hair is removed with pearls and gold, her face is not confused and not longing for future suffering, but pleasure. Mary is young and in her arms her child is sleeping – something that does not make her happy on the icons here is enough reason for joy. Next to her is a crowd of young boys and girls, one of whom holds a vessel in her hands – an alchemical symbol of the beginning of everything, conception that unites life and death in the picture. To the left of Mary sings praises to the Immaculate Conception of St. Jerome, the columns go up, not supporting anything, adding a picture of surrealism.

It is also surprising how all the characters are depicted. Parmigianino portrayed human heads with great pleasure and no less skill. Faces, even if they seem slightly elongated, look proportionate and beautiful.

However, it seemed to him that the elongation of bodies and members also shows beauty, because the picture bears the imprint of surrealism, which is added to her by the long neck of Madonna, the hands and feet of the others going nowhere, the column lost in height and the strange disproportion of Jerome’s figure It looks very small, although it is not too far away.

It is also interesting that the elongation of everything and the column going nowhere is only a symbol of humanity’s eternal striving for perfection – and its eternal unattainability.