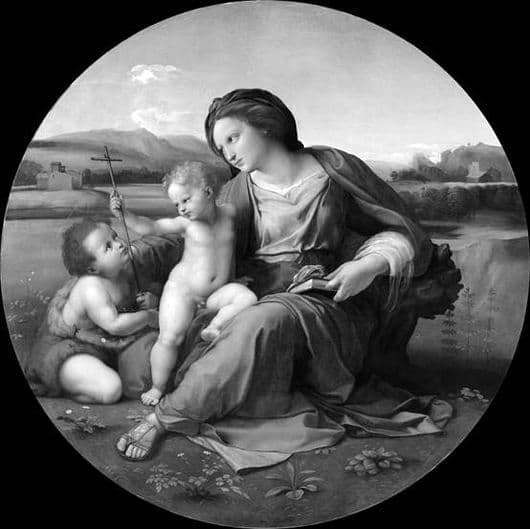 Cloths with images of saints were always in fashion. It enjoyed the same success and many rich citizens of the Middle Ages wanted very much to have in their house a portrait of the Madonna or Christ. But there were also triple portraits.

Raphael was the most exquisite painter of the Middle Ages and quite often executed orders with images of saints. Actually like this, on request, and this canvas appeared. It is traditional: the Mother of Christ Mary, the Christ-child and the baby John the Baptist. Everything seems to be traditional, but not quite. The landscape is somewhat different, and then Madonna herself shakes by its external magnificence and some sort of tranquility. It can be assumed that she went for a walk with the Baby and met John, the future baptist.

Who knows whether such a meeting was in reality or whether it is the fruit of the fantasy of painters. But this plot lured many into their networks. Not escaped this and Raphael. Madonna is wearing his blue tunic and holds a book in her hands and even sits on something like a chair. John joined them, and she seemed to be attracted to him, and Christ clutches at the cross. The same cross with which he will be baptized and on which he will be beaten during the execution. What is this if not destiny from above?

All three understand this, and therefore there is no alarm. They understand that the inevitable cannot be avoided. This is an amazing canvas, which is dominated by the blue color (chiton and the sky, a bit of the mountain). But the green color does not lag behind, is also present and gives us an amazing soft range. But most importantly, all the characteristics of the future of the children are already given – the Baptist in a coarse lamb skin, Christ, like all babies, is naked, but this is also not just that – it means that his soul is pure. And one more thing from symbolism – clouds over babies. This is also not just. This means that the fate of these children is not cloudless.