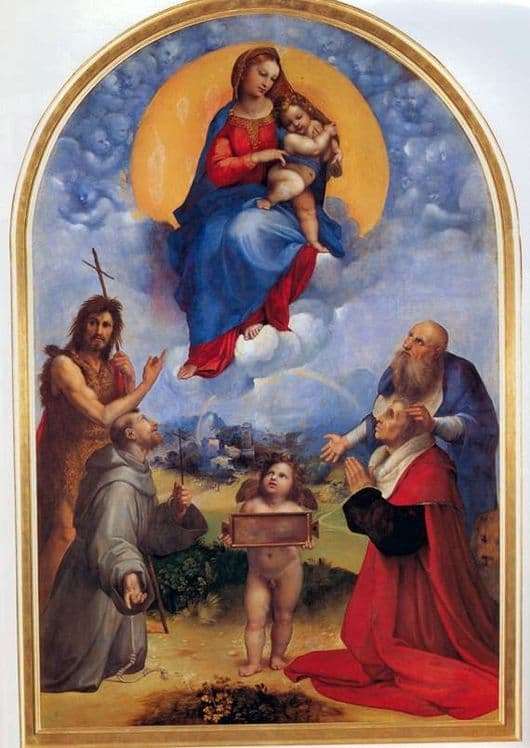 Once in Foligno, lightning struck near the house of a rich man, but no one was hurt, nothing was charred and there was not even a fire. In memory of this amazing event, the man – his name was de Copni – ordered an icon of the Mother of God to Rafael, who would help him never forget how close he once was to die and how far from that moment he was from God, repentance and absence sins.

And Raphael went to work. During his life he wrote many icons, and most often these were icons of the Virgin Mary. His most famous work, the Sistine Madonna, and Madonna di Foligno, is called the first attempt at writing, the forerunner of the most famous icon.

In the center of everything, of course, is Madonna – with a baby in her arms, she is floating in the air surrounded by cherubs and clouds against the backdrop of a golden circle, symbolizing her holiness. Her face is good. The pose is relaxed. Below are people who listen to her appearance.

On their faces, awe, distrust, religious ecstasy, de Copney is on his knees, folding folded hands in front of his chest. Behind, on the very horizon – a small town. This is Foligno, with its vineyards, low houses, brehlivy dogs, calm and honest people. A trail of fire stretches across the sky above him – that meteorite, that lightning, that heavenly phenomenon, in honor of the salvation from which the icon was ordered. He stretches across the sky, crossing it with a golden arc.

Performed “Madonna di Foligno” in the general style adopted during the Renaissance. A kind of soft realism, completely different from the canons of Orthodox iconography. Here people are just people, and in the Mother of God and Christ himself there is something human, albeit combined with the divine. Forcing him to remember that he is not only God, but God, descended to earth in a human body, in order to atone for others’ sins with suffering.