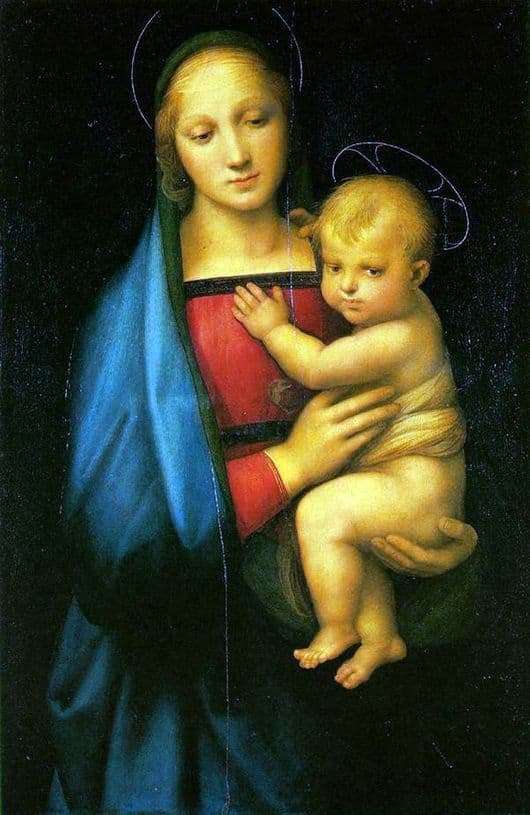 “Madonna Grandka” – one of the most famous canvases by Italian artist Raphael Santi. The plot of the picture is quite traditional – the image of the Virgin Mary with the baby in her arms.

A number of art historians suggest that the canvas was created by Raphael in 1504-1505, shortly after he moved to Florence. Here he became acquainted with the paintings of another Italian artist, Leonardo da Vinci.

The picture traces the apparent influence of Leonardo’s work. This and the use of the sfumato technique developed by him – softening of the figures, which allows to convey the feeling of air. This is also the background on which, as shown by radiographic research, a window was shown leading to the garden. The background was later removed. Now in its place solid black.

The reasons for which the old background was painted over are unknown. It is not even known whether Rafael himself did it, or any of the subsequent owners, the restorers. One of the possible reasons – some twilight, which also known paintings of Leonardo. Later Raphael refused to attempt to recreate the twilight and almost completely switched to the landscape background and sunlight.

Maria stands, turning her face to the viewer, slightly turning to the right. The colors of her clothes are symbolic. The red dress symbolizes the blood spilled on the cross. The bluish cape is a sign of purity.

It is not known what Rafael himself called the picture. The current name of the “Madonna Granduca”, “Grand Duchess Madonna”, the painting received several centuries later, at the end of the 18th century, when the Tuscan duke Ferdinand 3 bought it from the descendants of the famous Florentine artist Carlo Dolcea. Interestingly, for some time the picture was considered miraculous and hung in the bedroom of the duke. Later, she began to exhibit in the Pitty Public Gallery.