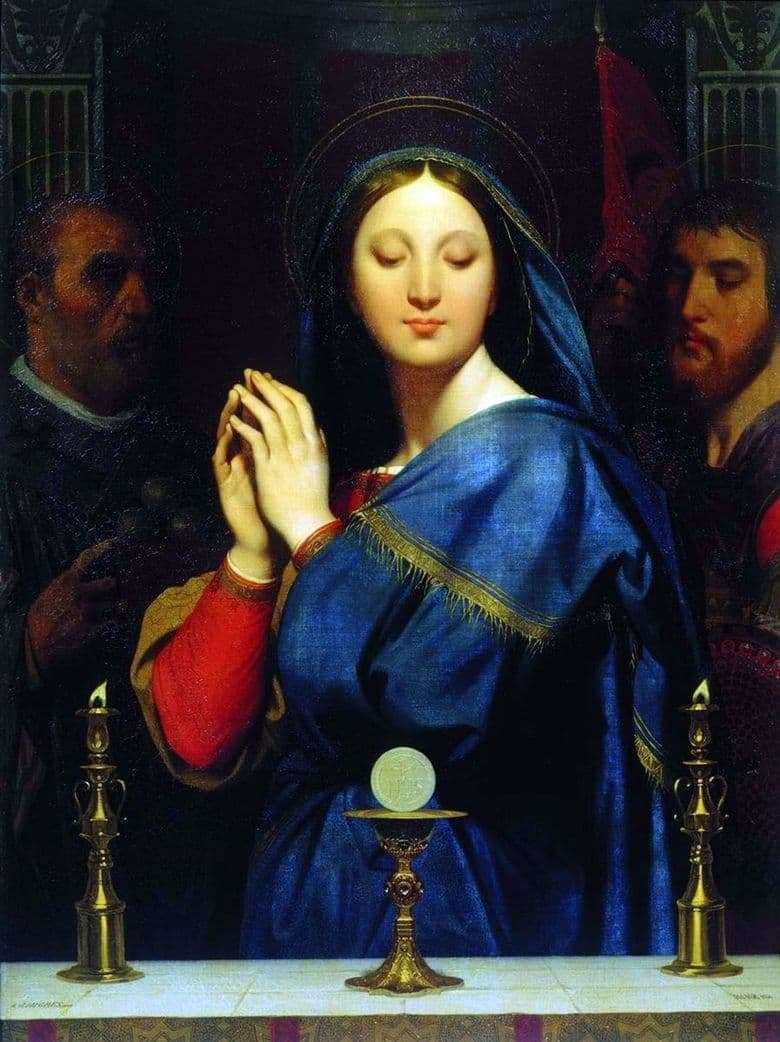 Jean-Auguste Dominique Ingres – the main face of nineteenth-century academicism. Known both as an artist and as a musician – in his youth he played in an opera orchestra. Almost half of adult life spent in Italy. Conventionally, the master’s work is divided into several stages. As an artist, he formed early; Engra had a great influence on the art of the Middle Ages. In the first Italian period (1806-1824) he painted pictures very close to romanticism. In Paris in the twenties he became interested in neoclassicism, but constantly went beyond the framework of this genre, because of which he had to break with the Paris Salon. Ingre believed that after Raphael the development of art went in the wrong direction, and that his task was to continue painting from the Renaissance level, crossing out all subsequent artistic achievements.

The painting “Madonna before the cup of communion” was written during the artist’s second stay in Rome. At that time, he lived in the Villa Medici – just like a quarter of a century ago. The reason for moving to Italy was the official appointment – Ingres became director of the French Academy in Rome. During this period, he carried out a reform of the education of artists, considering the education of the masterpieces of the past to be the most important for young masters. Picturesque works of the second Roman period reached our time a little. The picture “Madonna before the cup with communion” was ordered by the heir to the Russian throne, the future emperor Alexander II. The heir wished that, on the left and right of the Madonna, two revered saints in Russia were depicted – Nikolai Ugodnik and Alexander Nevsky.

In the center of the picture we see the Madonna, brightly lit in gold. The light source is outside the picture, the light comes from the viewer. The woman’s eyes are modestly lowered, but the flirtatious half-smile on her face makes a contrast with the classic religious storyline. Cloth to the limit is filled with characters. The number of items on the table is equal to the number of characters – in fact, the objects of the characters personify. Candlesticks are masculine symbols, the feminine essence is represented by a rounded prosphora. In Russia, the picture was not fully appreciated; numerous critics have complained that it is essentially Catholic and is not related to Orthodoxy.