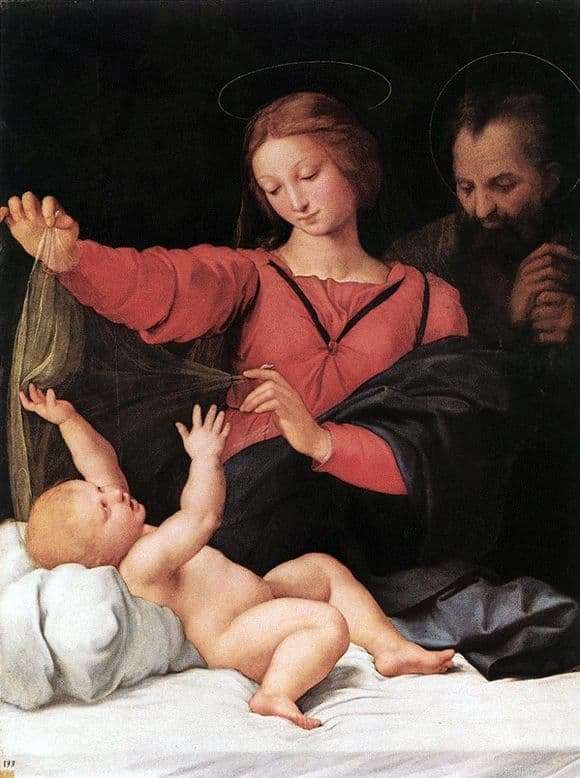 Rafael Santi is the creator of masterpieces, many of which have become invaluable assets of world culture and altar painting. The artist created in his unique style, combining the earthly and divine in immortal inspirational images. At the tomb of the great painter, admired contemporaries wrote words that nature was afraid of being defeated during the life of the artist, and after his death was afraid to die.

From early years to his apotheosis in the creation of the Sistine Madonna in 1513, Raphael portrays the Madonna in various variations, many works by an unsurpassed master still illuminate the temples of Italy and the Vatican. The story of the “Madonna with a veil” was more dramatic and mysterious.

The picture is written by order of Pope Julius II for the church of Santa Maria on Popolo street, where it was located next to the portrait of the pontiff, also made by Raphael. It was Julius II, under the impression of the Madonna with a Veil, who ordered the artist the future altar masterpiece for the Monastery of Saint Sixt. For a long time, the Madonna with a Veil was called the Madonna del Popolo until at the end of the 16th century it was sold to the Borghese private collection. Then its traces were lost several times, for some time the nuns of the monastery in Loreto considered Madonna del Popolo to be her own, which was why she was called “Madonna Loreto” for some time, but in the middle of the XVIII century the image disappears completely.

The picture, executed on a specially processed board, depicts the Holy Family. Maria pacifiedly plays with a translucent veil with the awakened Infant, Joseph is watching them, whose figure according to the research of scientists was added later instead of the window originally depicted behind Mary. The face of the Madonna, inclined to the son, is filled with endless tenderness and quiet sadness, she is calm and enjoys a short period of carefree communication, knowing what fate is in store for her beloved infant.

The light in the picture comes only from the snow-white sheet and the radiant body of Jesus, Mary’s red dress gives the composition a light joy and a sublime mood, but the rest of the image is enveloped in dense darkness. Not a shadow of a smile on the face of the Holy Virgin, Joseph hides grief and squeezes his hands tensely behind the back of the Virgin. The joy of being and the pain of all human suffering are intertwined in the picture into a complex and indescribable range of feelings and emotions.

In the 20s of the last century, the picture is again considered acquired. Renowned art historian and restorer I. E. Grabar brings from Nizhny Tagil a picture disfigured by time and insects that has all the signs of a lost masterpiece by Raphael. After three years of restoration, he still attributed the picture as the original, until the end of the 70s the picture was exhibited in the State Museum of them. A. S. Pushkin, however, then the museum employees refused attribution and returned the painting to the Nizhny Tagil Museum.