Home ⇒ 🎨Masaccio ⇒ Description of the painting by Masaccio “St. Anna with the Madonna and Baby” 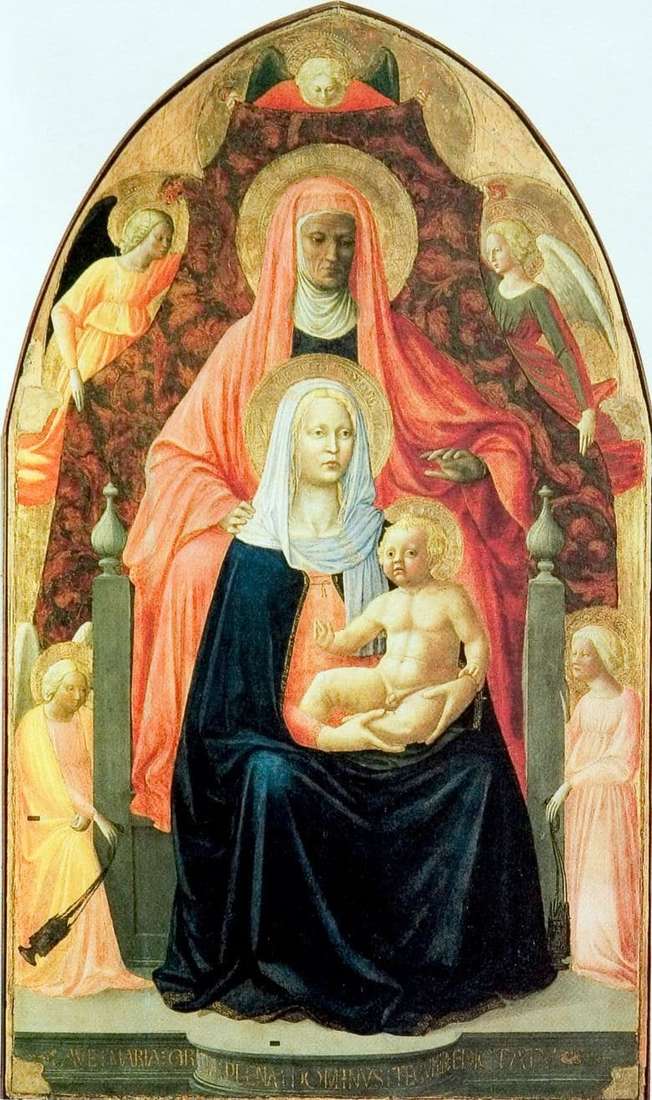 “Saint Anna with the Madonna and the Baby”, commonly called Sant’Anna Metterc, is a pictorial work painted with tempera, measuring 175×103 cm. The author is considered to be the great Masaccio, who wrote it between 1424 and 1425. She is kept in the Uffizi Gallery in Florence. The work is a masterpiece of creativity Masaccio and one of the key paintings of the first milestones of the Florence Renaissance.

It is believed that Masaccio painted this picture for the basilica of the Florentine church of Sant Ambrogio (St. Ambrose), then in 1813 it became part of the collection of the Academy of Art, and then the Uffizi Gallery in 1919.

The form of work is unusual for that time, in the absence of side panels, some researchers suggested that it was the central panel of a polyptych, which was divided in 1568.

Three angels put the precious Damascus drapery behind the Madonna, the baby and St. Anne, creating the depth of the picture, the background is much more modern than completely golden, specified in the Renaissance canons. At the bottom of the picture there are two more angels, whose figures also follow hierarchical proportions – they are much smaller than the figures of saints. The saints, in turn, are on a throne consisting of two parts, with a pedestal.

Art critics agree that iconic canons intended to strengthen the figure of St. Anne, the mother of Mary and the grandmother of Christ, who was supposed to save Madonna and the Child. This is indicated by a protective gesture – the hand is located above the head of the Infant. The original use of light, written by Masaccio, inexorably moves the focus to two figures in the foreground, which is contrary to traditional iconography.