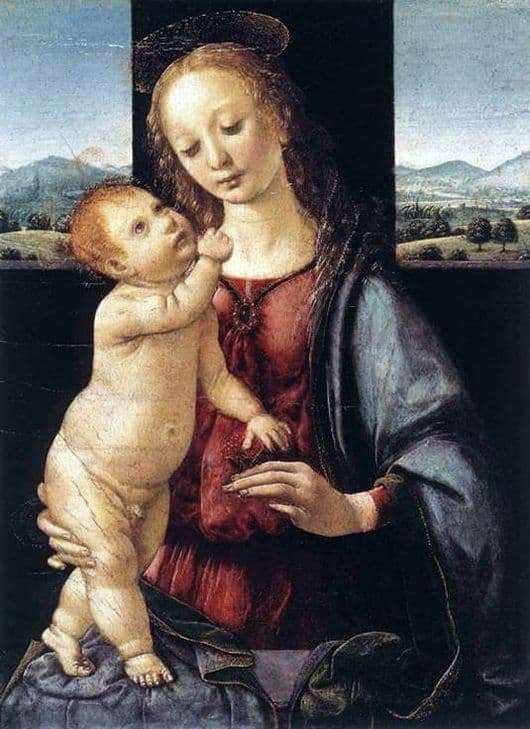 The painter had the presence of a special composition, with the help of which he, as it were, on the finished work seemed to leave the presence of “windows of incompleteness” on purpose. Most likely, in this way, he tried to leave a place where life itself could play its key role and make its own specific adjustments to this unique work.

The canvas emphasizes the desire of the artist to give the woman more glory, like Madonna. Especially attracts the attention of the audience the central part of the work, which turn their attention primarily to the softened gesture of the hand of Madonna. Her lowered eyes emphasize modesty and sadness.

The baby is presented in the form of a sculptured and seemingly alive child, who is ready to grasp and play with mother’s hair with joy. Every detail of the picture inscribed by the master displays the maximum realism and is clearly visible.

Madonna’s large forehead is framed by light hair coming down on her shoulders in the form of golden curls. Some of the imbalances in the body of the child are due to the lack of an infant who could pose for the painter or the presence of a desire to specifically give them variability so that the unearthly origin of the child is as fully emphasized as possible.

This painting by Leonardo da Vinci was written in the one thousand four hundred and seventieth year. Work is currently in the United States of America, and more precisely in the art gallery located in the city of Washington.