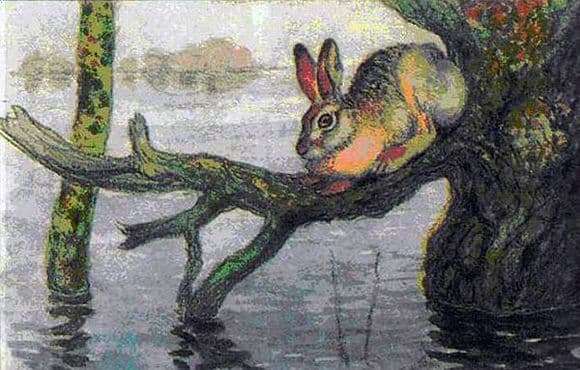 Komarov depicted animals in many of his paintings. Before us is one of his creations.

The plot of the canvas was the early spring. The snow in the forest has already melted, the river is freed from the oppression of ice. As a result, the water spilled. Nora animals flooded. They had to urgently leave their homes and move to elevated places. But on land, unfortunately, not everyone has enough space. Yes, and escape is also not possible.

Before us is a hare, which had to quickly escape from rapid flooding. He found himself a haven on one of the branches of a tree, half-heated by water.

Komarov masterfully depicts this hare. It is gray with a darker back. His eyes are green and wide open. He watches in horror as the water continues. The viewer feels that the animal is very scared. He is trying to cling to the saving trunk in order to feel at least some kind of support.

With his hind legs, he specifically rested against the bough. He stretched his front legs and clawed at the bitch. Hair on a curved back sticks out. The hare is waiting for the long-awaited salvation to come. If the water still continues to remain, the hare will have a very bad time.

The artist chooses dark tones for his canvas, which symbolize the danger that threatens the hare. Light shades of yellow, blue and pink indicate that there is still hope for a happy salvation.

We unwittingly fear for the life of this unfortunate hare. I really want to help him to save him.

The hare symbolizes helplessness and incredible weakness. The second high-grade hero is water. She captures all the space of this canvas.

Komarov conveys the powerlessness experienced by living beings in the face of merciless elements.