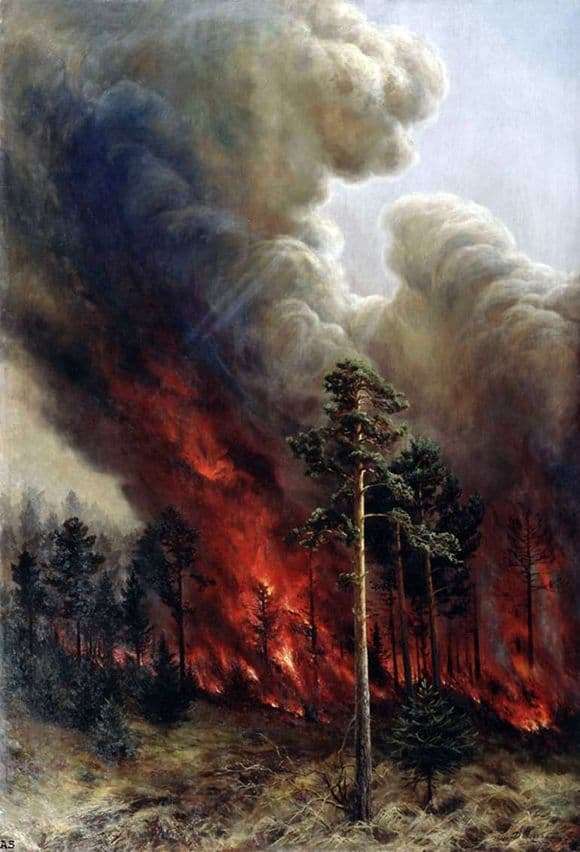 Connoisseur of the beauties of the native Ural, Denisov has always been distinguished by the realism of the image on the canvas. He was aware that beside the beautiful lies the wild nature that carries destruction.

The artist devoted several of his works to the indomitable element of fire, which in moments of the eye can turn from good to destructive evil. This force and indomitability was depicted by Denisov-Uralsky in his picture “Forest Fire”.

To be precise, the artist has several such paintings, but the first among them was written in 1897.

Here the fire element is depicted at the peak of its strength. She rushes forward, destroying everything in its path. The fire depicted by the artist instills fear and awe.

Denisov revived his fire. He turned him into a beast devouring pines. These giant trees seem tiny in comparison to the tongues of flame. Such a proportional ratio of objects only increases the emotional stress of the picture.

The artist’s skill is so great that he managed to convey the movement of fire: flames soaring up to the sky are ready to absorb the sun itself, smoke envelops all visible space, and the heat continues to spread around the earth in small elusive snakes. It seems a little more – and only the fire will remain.

The picture is played in color contrast: shades of orange, red and gray embody death and destruction, but the trees and grass remain green. They have not had time to get fire, and the plants are amazing saturation of flowers. The crowns of the trees are depicted emerald, and the grasses are pale green. After all, they are still full of life, which is felt thanks to the colors chosen by the artist.

The glittering fire and thick puffs of smoke create an exciting spectacle with its realism. They fully reflect the power and beauty of a forest fire, without diminishing the first or second.