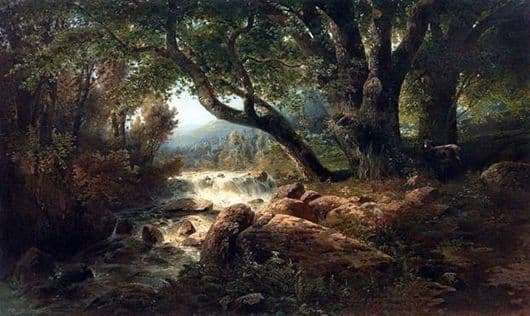 Shishkin, Levitan, Korovin, Savrasov… Great names that glorified the beauty of Russia and not only. Often these artists traveled around Europe or very close to the Caucasus. The same Levitan with pleasure on his canvases depicted the mountain ranges of the Caucasian expanses.

Savrasov, apparently, also could not resist the temptation to portray something mountainous. And here it is – the landscape, which in its magnificence is not inferior to any of his paintings or paintings of his colleagues. There is everything: the mountain passes in the background, and eternal oaks on the shore of the waterfall. Waterfall – the main force of nature of the mountains. And how exactly the artist was able to catch the play of the light of water and the sun.

Cloth somewhere almost dark, but somewhere very very light. This is an amazing skill not to overdo it, to find a middle ground in the image of probably the most

complex element in the picture – light and shadow. This filigree is amazing. But the most amazing thing on this canvas is the feeling of the noise of a waterfall. It seems that you can hear his life, you can hear his even and monotonous sound. It’s like a perpetual motion machine.

Savrasov is one of those great landscape painters who almost never forgot to draw details. Take a look at the stones, as they are clearly and at the same time not quite brightly traced. In fact, they are the main characters of the canvas, because there would not be them, there would not be the waterfall itself. Before us would just flowed such a cheerful mountain stream and nothing more… But then the waterfall, with its power, with its history, with its life.

But it is worth returning to light and shade design. It is made clearly compositional, in the center of the canvas. This is the brightest spot of light. Then it just gave the opportunity to shade the rest well and to show what is in the shade. First of all – the shores of the waterfall, which are quite intensively filled with greenery. It is understandable, water and plants are interrelated.