Home ⇒ 🎨Venetsianov Alexey ⇒ Description of the painting by Alexei Venetsianov “Here are the batkin and dinner!” 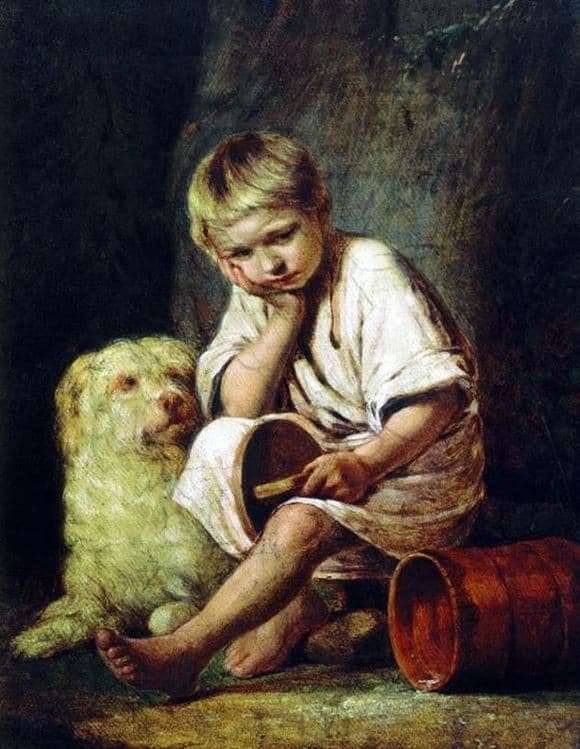 The peasant theme became central in the work of Venetsianov since 1820. It was at this time that the Russian painter left the capital, moving to Tver province. Now he personally meets with the joys and sorrows of the common people. Here, on the estate of Safonkovo, he writes genre scenes with the participation of peasants.

“Here are the batkin lunch!” Was presented at the exhibition at the famous Academy of Arts. The picture was created in 1824. It tells of a passage from the daily life of a peasant boy. In appearance, the hero of the canvas is not more than 7 years old. But not on the face of a child enthusiastic childish joy. Blond boy sitting in a wistful pose. The long white shirt is his only robe. Bare feet he leaned on the ground and stones. One hand props the face, the other holds the lid of the shooter. At his feet – an overturned container with milk residues.

The little boy was assigned a responsible task – to bring lunch to his father, who works all day in the field. But he failed to fulfill the task. Either played, or could not bear the heavy weight of the burden. Sits now offended by himself and sad. I wondered what was waiting for him now for misconduct. After all, it was not out of evil that Batkin’s dinner turned upside down.

The figure of the little character is well lit. Venetsianov worked in detail on his portrait. All emotions are read on the face of the hero. The viewer involuntarily has to sympathize with his misfortune.

A shaggy dog looks at the little boy with a devoted look. True friend silently supports the guilty. But this help is not comforting a tanned child. How is the father now without food? Scolded now at home or deprived of it for dinner?

With sullen colors and an eloquent plot, the author showed the plight of the village. Poverty from an early age makes you work and think about the daily life.

The canvas “Here are the ones and batkin lunch!” Perfectly fit into the collection of the famous Tretyakov Gallery.