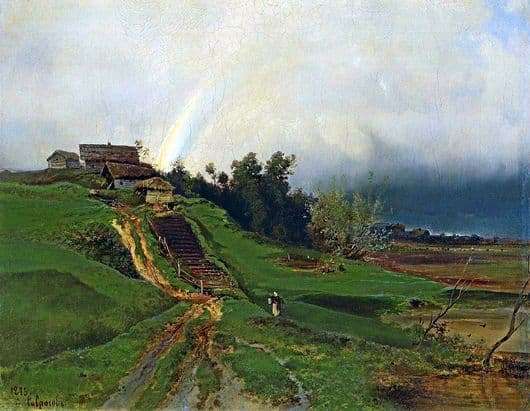 Savrasov was looking for beauty in simple, ordinary landscapes. His paintings are imbued with love for native spaces. From under the artist’s brush, simple corners of Russia appear, but sweet to the heart and soul. The painting “Rainbow” is also in this series. The crooked huts, dense thickets, ravines, blurred roads, an uneven shore and a wide river – all this is so ordinary and so natural.

The painting shows the outskirts of the village with the gray lop-sided houses, the descent to the river in the form of a wooden staircase. After the rain, a rainbow appeared above the village, transparent and slightly noticeable. Streams flow from the hill, forming grooves.

In the distance you can see the continuation of the village. And above it – black clouds that take the rain with them. Of the people depicted only one woman who returns home from the river. She carries a rocker with buckets filled with water. The picture on the right shows the river. It reflects the brown-yellow sky. The water is still muddy after the rain.

The sky occupies almost half the canvas. And on the lower half juicy greens are dominated by grass washed with a rain. Most likely there was a strong thunderstorm. The rain was over, the clouds were gone, but the streams are still flowing. The air is clear, there is no dust. It creates a feeling of silence and serenity.

The rainbow is the brightest part of the picture. But at the same time, it is not bright, not artificial. It is light, weightless, like air and light. A boardwalk as if leading to a rainbow. And the rainbow itself connects the sky and the earth.

You can trace the eyes of a long line dividing the picture into two parts vertically. It begins as a road at the lower edge of the canvas, which then leads to the hill. This climb continues the rainbow, carried high. Maybe the connection between earth and sky is reflected? Or the harmony of this place? People here have not conquered nature. They learned to live with her in unity, resigned to her strength. They know that after a strong thunderstorm a fresh joyful rainbow will soon appear. From this landscape is not at all sad and heavy, but light and light.