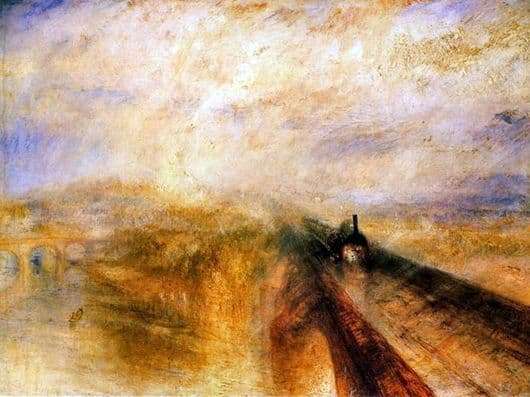 The painting “Rain, steam and speed” written by Turner in 1844. This time in English history is considered the era of general interest in the railroad and trains. And this fate did not pass William Turner. Contemporaries say that while touring by rail, the artist looked out the window and was amazed. His impressions he throws on the canvas.

The purpose of the painter is to transfer the speed of the train to the canvas, which is why the picture is so blurry and fuzzy. The moving engine is most clearly visible, with its pipe being especially clearly and vividly drawn. This is done to show the power of technology and the new coming time.

Turner wants to show the locomotive as a fierce beast, rushing at full steam. Everything else is blurry, but guessed in a golden haze. Below distinguishable small boat and plowman. Turner depicts them as a symbol of the retreating era, forward speed. Distinguish the bridge on the supports and the river bank, on which crowded people looking at the engine. To mark the high speed of the train, Turner depicts several white spots above the pipe, symbolizing the vapor that did not manage to disperse. In the lower left corner, the hare’s figure is barely discernible, being at all times a symbol of speed. But the hare is also much lower than the speed of a locomotive.

William Turner was an innovator in the genre of the image train, popular at the time. All artists tried to give the center of the picture to the car itself, to draw all the little things. And Turner wants to show precisely the power and speed of the train, so the whole picture is as if veiled by a haze. It is believed that the artist depicts a real place – the River Thames and the Maidenhead viaduct.