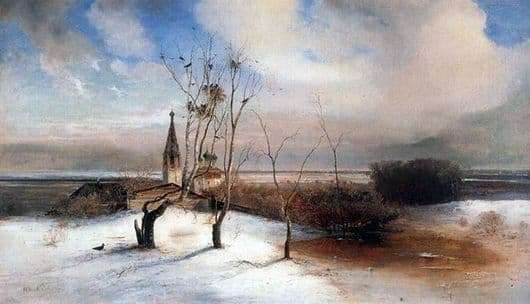 The painting “The Rooks Have Arrived” by A. K. Savrasov wrote in 1871. Almost immediately, the simplicity and artlessness of this canvas attracted the attention of contemporaries. The famous patron of arts and art connoisseur Tretyakov immediately acquired this masterpiece for his collection.

The main theme of the picture – the onset of spring. The artist managed with extraordinary skill to show the awakening of nature after a long winter hibernation. The colors of early spring are not striking in their brightness. On the contrary, the canvas is dominated by a grayish-brown gamma, calm and muffled.

In the picture we see the outskirts of a village or a small village. The first plan is completely given to the image of spring nature. Left – loose, melting snow with traces of animals and birds. It has nothing left of the winter splendor and snow-white pomp. It is immediately clear that there will soon be no trace of this omen of the cold season. On the right, the snow has already turned into a spring thaw, filled with clear, cold water. In the foreground, the artist placed the birch trees, thin, touching and some particularly defenseless in their nakedness. Their heyday is still ahead. In the meantime, the bare branches of the trees were chosen by the rooks. These are the first harbingers and heralds of spring. The birds returned to their homelands and settled their nests.

The next plan of the picture begins behind a plank fence. Behind it stretches a boundless field on which snow still lies. The land is waiting for the start of agricultural work. Here you can see the roofs of the village houses and the old church with an abandoned bell. The far edge of the field merges with the horizon line. The sky in the picture Savrasov also indicates the imminent approach of spring. A bright blue is already peeking through the clouds of clouds, against which the silhouettes of rooks look especially bright and contrast.

The picture leaves behind a feeling of spring freshness, lightness, transparency, joyful foreboding and anticipation. This is a kind of symbol of renewal of all living things in nature.