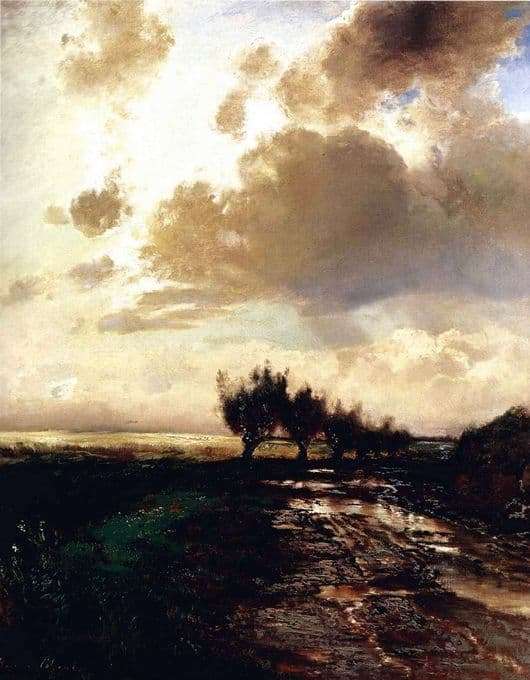 The painting of the great Russian impressionist artist of the XIX century Alexei Kondratievich Savrasov “Country Road” was written in 1873. The canvas depicts a simple and charming Russian land, the grass washed by the rain and a blurred road. In the foreground of the picture, the viewer sees only a marshland, while in the distance he can see trees and even a golden wheat field. The sky is covered with clouds, but this is only for a short while, because of them, the sun will very soon appear, in order to dry up the wet earth by the summer hot rays.

In the right part of the picture, the artist depicts a piece of a hill, as if inviting the viewer to look behind the canvas and continue its further journey in the calm and tranquility of a country road, the dawn sky and the freshness of wet grass. The picture is located as if in a misty haze, and only in the distance does the blue sky look, and there are clear signs of the coming day, which threatens to be sunny and warm.

The canvas at the same time calms and brings back memories of a thunderstorm that had just passed, the reflections of which are still reflected in puddles on a country road. Despite the fact that today the picture is one of the epoch-making in the artist’s work, he himself was disappointed by her and did not feel great pride in the work done.

Maybe that’s why he so easily presented the “Country Road” to his friend I. Pryanishnikov, in whose closed home collection she remained for a long time, being presented to the viewer only in 1893, that is, just a few years before the artist died. Strangely enough, the picture was liked and even deserved a lot of praise, although it was compared with canvases more characteristic of another landscape painter, Fedor Vasilyev, from which the author was not enthusiastic, defending primacy on the idea to the very end.