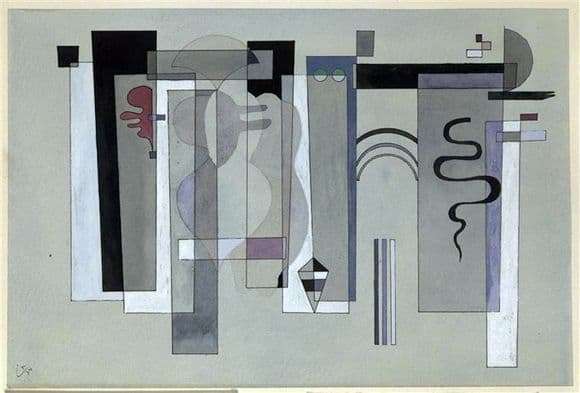 Kandinsky had his own theory of painting. In it, he singled out the provisions of art that require close study. This is primarily a form. No less important is the color that decides the depth of construction, using the laws of optics.

Picturesque details determine the depth. Another position – the material and space. By this artist meant features of surface treatment. In his work, he used the technique of layering, and also skillfully used the laws of the perfect combination of colors.

The artist is a vivid representative of abstract art. To the inexperienced spectator, at first glance, it may seem that the picture shows unremarkable lines of different shapes and shapes. In fact, the meaning of this work is very deep. It laid a huge philosophical content that defines the artist of this time.

Kandinsky understands that color and form does not require substantive motivation. Paints are an important point for creating a holistic perception of creation.

Before us is a real secret writing. Hieroglyphic writing. It was this manner that was characteristic of the work of this period. The artist is interested in the problems of space. His work is not replete with rich colors, because what is important here is different. The line is amoebic in nature. Feels cold style. Forms as much as possible are geometrized. We see all sorts of surfaces depicted by the artist, which are miraculously found on his canvas.

It is no coincidence that the name of the picture. Kandinsky is trying to combine the old motives of his work and new techniques.

Despite the fact that Kandinsky uses gray-blue tones, there is a bright space in his picture. It is open to viewers. But this does not mean that darkness has no place. This is exactly what happens in nature.