Home ⇒ 📌Monuments ⇒ Description of the monument to the hare in St. Petersburg 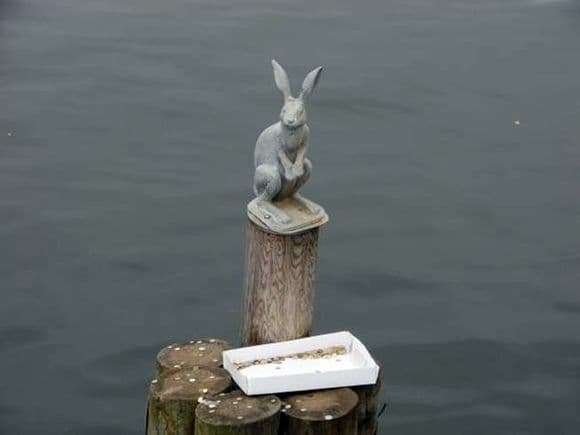 There are several legends associated with this building. Residents of the city of St. Petersburg wanted to perpetuate the memory of hares. One story tells how Peter first saw the animal on an island in the mouth of the Neva River. He commanded here and start building the city. And the island itself was called Hare.

Another story tells that the hare, fleeing a flood, caught Peter the Great’s foot. And so the island was given the name Rabbit, and the construction of the city began from here.

The bunny figurine stands in front of the Peter and Paul Fortress on one of the wooden logs that protects the piers of the John Bridge from ice. The discovery of this sculpture took place in 2003, on the seventh of May, when it earned a bridge after reconstruction.

The figure is made of a compound of aluminum, duralumin and selumin. And the top is covered with nitrite titanium. Its height reaches 58 centimeters from ears

to heels. The author of this work was the sculptor Petrovichev.

After installing the animal figurine, it became the symbol of the bridge. And it doesn’t even interfere with the fact that during the competition in boats, some participants fall on a column with a hare and knock him down. But after such accidents, the hare was always put in place. In addition, the figure has been stolen several times.

The base of the logs, where the bunny figure is located constantly attracts tourists and citizens. They began to organize here competitions in accuracy, who will drop a coin to hemp. This game has long become a ritual, today many coins rest on the bottom of the channel.

There is even such a belief: if you throw a coin to the hare, make a wish before it, it will come true. Almost all people like this sculpture, so many began to install different funny figures. Therefore, the hare can still be called the discoverer of a new era of the architecture of the city of St. Petersburg.