Home ⇒ 🎨Savrasov Alexey ⇒ Description of the painting by Alexei Savrasov “By the end of the summer, on the Volga” 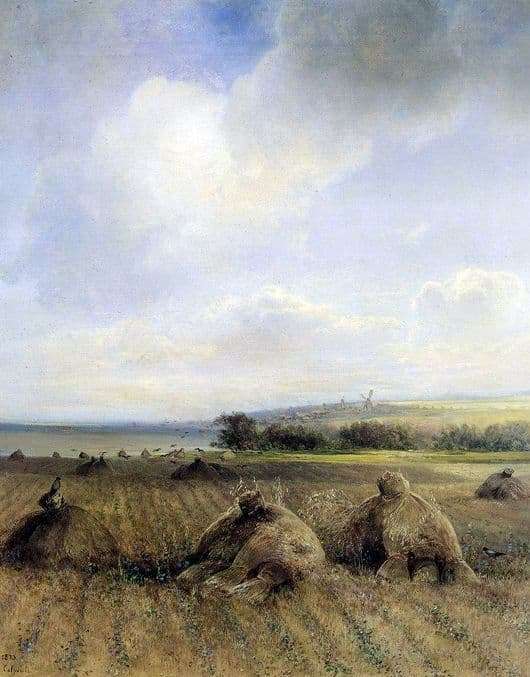 Volga nature is a special northern nature. Well, in any case, those places that Savrasov depicted on his canvases are just the north of Central Russia, that is, Yaroslavl and the nearest territories to this city. And the summer here is special – it can be rainy, and it can be hot and even suffocating. Here on this canvas the artist depicted the field already cleaned. The haystacks are already stacked, and the birds in the field replenish what the peasants have not removed.

A village is visible in the distance, and a mill is nearby. Suffering time is over, which means that you can relax a bit. We managed to harvest before the weather. And the fact that it will rain on the canvas is noticeable – the clouds are already painfully thunderstorm. August is generally considered a forerunner of autumn since ancient times, although it is revered in the summer month. But if you recall the story, it was in September that the New Year was celebrated, at least until 1699 it was so. And then August was just the fall month.

On the canvas is still the main place is given to the sky. It is spelled out in detail. Clouds of different shades and blue behind them. And the three haystacks in the foreground show how well the harvest has gone, the sheaves of hay lie on the stack. A little to the side visible is Mother Volga, the breadwinner of Russia, with its waters that are closer to the shore seem blue-gray, and far away in blue.

How many years the river flows, but it never ceases to amaze with its grandeur and its wayward character. It may seem full-flowing, but it may be a little shallow. Previously, many farmers tried to settle closer to the water: there is work, and irrigation of the fields will be provided. But because of their willfulness, often among the peasants, the crop died from flooding or from drought, shallowing. It is now that we have modern technologies, and they save us in the event of a flood, and in fact then it was a real disaster and not everyone received salvation.

Savrasov described the moment when the harvest was over, and nature breathed a sigh of relief: all that had increased, people had time to remove.