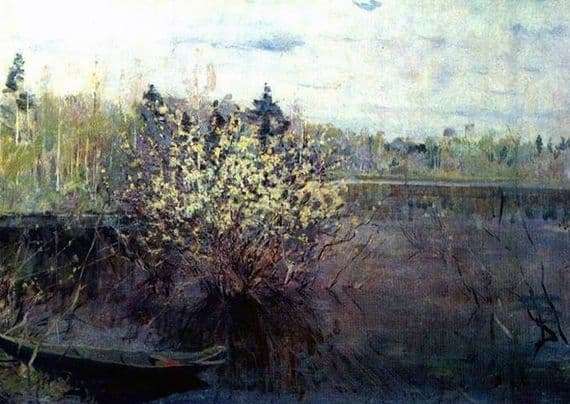 Romadin is a Russian artist, born in the family of a railway worker. At the beginning of his career, he wrote on historical themes, then rethought his work and switched to landscapes, which he remained faithful to the end of his life.

“Willows in the flood” – one of his paintings, depicting a difficult time for nature – early spring. No matter how much they wait for her, no matter how much people sing her, in the world, when she comes, there is a lot of water and danger for all living things.

Rivers overflow, water floods the forests, and everything remains covered by it for a long time, which has to be experienced, experienced. Plants cling to the ground with their roots, animals look for dry places where there is food and you can take shelter. All living things strive to just hold on, live to the moment when the water comes down and warm days come, filled with the sun.

Verba – in its own way revered in Russia plant. It was believed that she could ward off evil spirits, and on Palm Sunday her branches were used instead of palm leaves. She begins to release the leaves first – first fluffy, soft, then they open and turn green.

The picture shows exactly blooming willow. She stubbornly stretches to the sky, her branches are all covered with fluffy buds, but almost half of it is hidden by dark muddy water. In the distance there is a forest, birches, already released the first sticky leaves, trying to wait until the flood ends.

A small boat is rocking on the waves – maybe it was left here, and maybe a misfortune happened to the owner. But, despite the fact that the flood is a difficult time, and the water in the picture is muddy, gray and deep, there is a bright sky in the lambs of the clouds, as if promising that everything will pass, everything will change, and this spring will start sooner or later – you only need be able to wait for it, holding tightly to the roots of the earth and stretching the branches to the sky