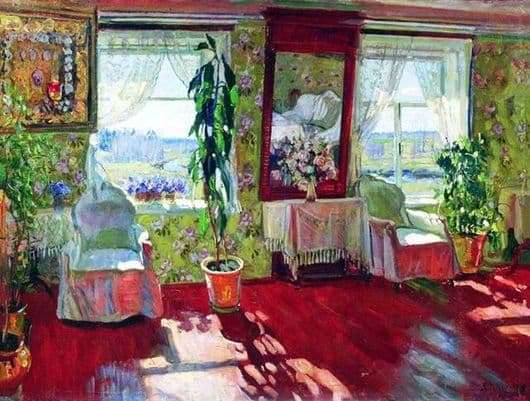 Stanislav Zhukovsky is one of the most famous landscape painters of the late 19th century, who worked in the style of impressionism and realism. First, all his works are made “from nature”, that is, each creation as accurately as possible conveys the nature of those lands and those times. Secondly, he used the original technique of applying smears and chose warm, bright, rich colors that cause only positive emotions. Zhukovsky paid special attention to the transmission of light, as he believed that the “vividness” of the picture depended on it. In addition to landscapes, the creator paid much attention to interior painting, which occupies most of his creative path.

The interiors of the artist, both premises and courtyards, are also distinguished by a bright range of colors. Every detail is individual, original, unique. As close as possible to the original, he tried to recreate a psychological portrait of the interior, to show his mood. As for the so-called “psychologism” of the works of Zhukovsky, it was to show the connection of art with modernity, to trace the main experiments in the field of architecture and design.

He sought inspiration for his paintings while traveling around cities and villages of Russia, while he loved not only rich houses, skillfully made in Baroque or Neoclassicism, but also ordinary houses, as well as their verandas, terraces, gardens.

He selected colors not only on the basis of the style of the interior itself, but also on the basis of psychological portraits of the owners themselves. This is the secret of such high skill transferring the smallest details to the canvas.

Interior painting is not very different from other works of the artist. The styles and techniques used are the same, the color range is as warm and bright as in the landscapes of Stanislav Zhukovsky.