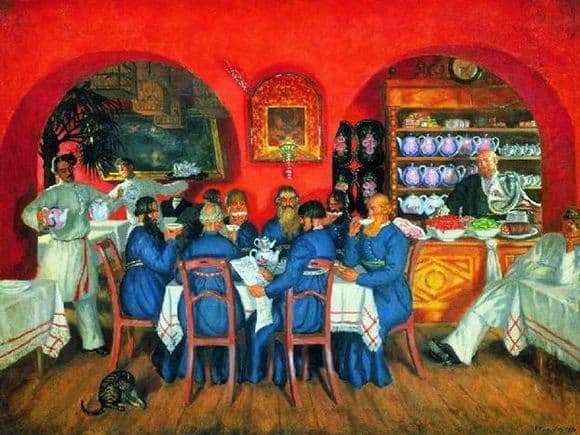 1915 – the time when Boris Mikhailovich Kustoediyev was actively in Moscow, studying all of its coloring and the backstage of the front life. In the same place, the artist became acquainted with such a special place soaked in the spirit of Moscow as a tavern. The tavern in Moscow is a completely unique place, in which people are accustomed to talk, relax, share news and talk about something that is unacceptable to talk in the ceremonial expanses of the big White-stone Moscow.

This is how we see the tavern in the picture of the artist Kustodiev. The sleek, graceful and festively frilly waiters, as we would call them today, spread tea to Muscovites, circling around them in a desire to please and make their stay in this restaurant special. Here you can see both the hospitality and the generosity of the Russian soul.

The bright interior of this tavern is the first thing that catches the eye. Its red walls and vaulted ceilings transfer us to the atmosphere of an old Russian fairy tale. Against this background, people stand out in contrast to whom the artist also played a large role in the construction of the composition. Noble men in blue clothes talk about something important, all this tea-drinking looks like a certain mystery of the backstage Moscow generous life.

The action depicted in the picture takes place before Easter, sometimes a verbal twig stuck in a wooden image speaks to the viewer. The powerful spirit of the Russian person is transmitted to this incredible perception of the picture. The central group of people, as was mentioned earlier, looks very important, but according to the form of their clothes, it can be concluded that they are known to be cab drivers. This goes against the conventional wisdom about the people of that profession, and, undoubtedly, elevates them, for which Kustodiev has a special thanks. Behind their tea, they rest from hard work, they think of something obviously pleasant, otherwise they cannot be in such a hospitable atmosphere! Under the image sits, apparently, the elder of this group.

The cells hanging above the ceiling cherish the little birds, which serve as a kind of musical accompaniment to this building. Everything shown by Kustodiyev is fabulous and magical, showing the breadth of the Russian soul and devotion to the original traditions.