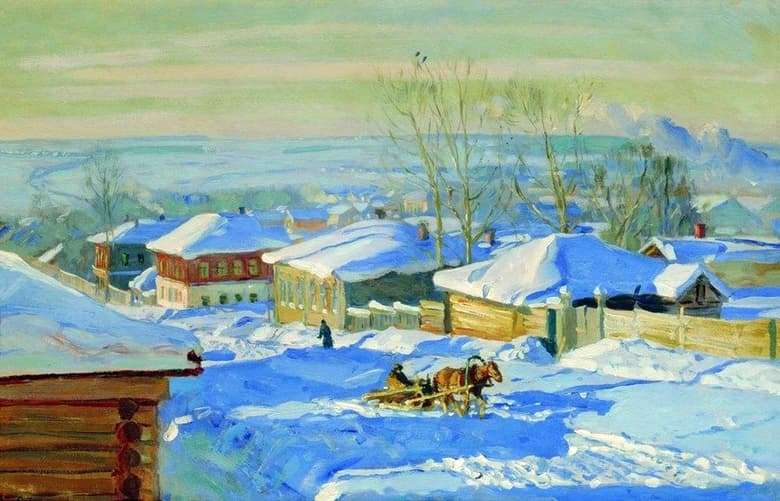 The painting “Winter” was painted by Stanislav Yulianovich Zhukovsky in 1915.

His work bordered partly on the Wanderers, partly on the world of mussels, and this collectively reflected on the writing of pictures.

“Winter” conveys a more urban landscape than a rural one, since houses are built of brick and sturdy log houses with dense fences along the road.

The snow has an incredibly blue shade, it is like a large duvet covered all the earth and the roofs of buildings.

On the snow-covered road, the large sledges harnessed by baffles have repeatedly passed, leaving clear lines behind them. Also visible are the pedestrian tracks that stretch across the road, from one side to the other. It conveys a feeling of liveliness of street life.

And the man, captured in the foreground, slowly passes along the street in a sleigh. His horse had and steadfastly overcomes snow obstacles. The sidewalk for pedestrians on the sides of the road has already been cleared, and the black silhouette of a passer-by is quietly moving along the street.

Between some houses are tall trees with large bare branches. Some of them have black birds in some places.

In the background, the artist depicted the outskirts of the city with a multitude of two-story brick houses and other buildings. Behind them lies a snowy valley, in which here and there rare mountains rise, the blurred outlines of forest belts and a slightly meandering river covered with ice. It originates somewhere in the distance and rapidly stretches right up to the very edge of the settlement.

Understanding exactly what this time of day is not quite possible, since the shadows from the sun fall on the left side of the canvas.

Today, the picture of S. Yu. Zhukovsky is in a private collection.

← Description paintings Vasily Vereshchagin “Before the attack. Under Plevna “
Description of the painting by Jean-Baptiste Chardin “Copper Water Tank” →