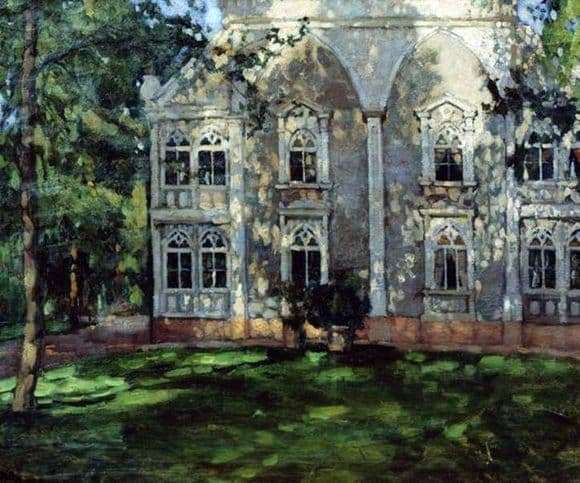 Zhukovsky is a Russian artist with Polish roots, a famous landscape painter who worked in the style of realism and impressionism. Often I took for the pictures completely everyday, boring things, past which people who are not endowed with creative imagination go through every day, not paying attention to them, and fill them with a special meaning through their eyes.

He studied with Levitan. Ten years contained a school for young artists – it existed until the revolution. He was called a lyrical landscape painter – all his paintings were distinguished by an exceptionally peaceful and quiet mood.

“In the park” in terms of mood does not differ from the rest of his paintings. It depicts a summer day. The side of the noble estate is decorated with patches of light and shadow, the sun’s rays seep through the foliage and form its own complex ornament. The grass is cut short and also covered with spots from

When you look at the picture, you can literally feel the sleepy rest of summer afternoon, when all living things are in a hurry to take refuge in the shady depths of forests and parks, and it is tempting to imagine the coolness that reigns inside the estate – you see that it was built for a long time, and under high ceilings, coolness is at ease, as under arches of natural grottoes.

There are no people in the picture, which is understandable, because this is a landscape. But it seems that the real reason is not the case – in fact, everyone hid from the heat, indulge in an afternoon nap or sunbathe on the open lawn.

Children, perhaps, play badminton, and the estate, seemingly strangely abandoned, as if dreaming of them. But the park is empty, quietly under the canopy of trees, the sound of footsteps on the footpath is not audible – the park is dozing, the manor is dozing, and only the sliding, brisk green shadows from the leaves dare to disturb this peace.

In fact, not violating, but further emphasizing it and making it eternal.