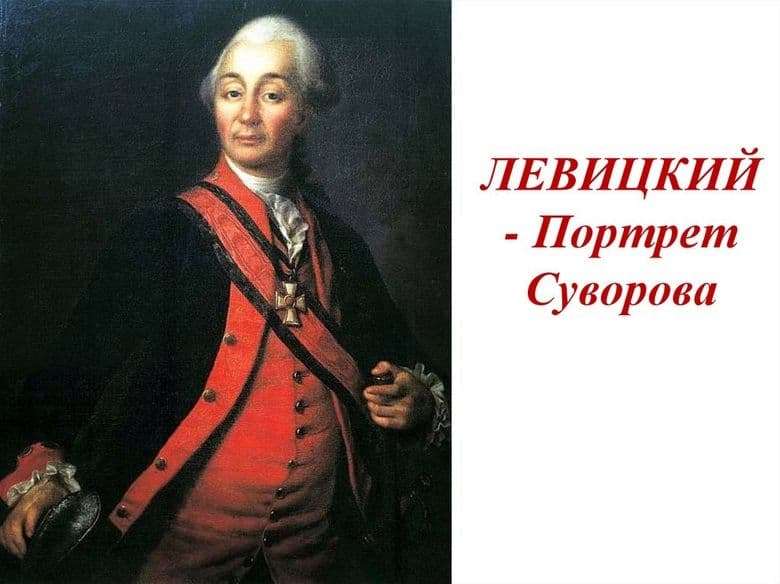 Date of writing – 1786 year. Located in the Museum of V. A. Tropinin and Moscow artists of his time, Moscow.

A portrait of the great generalissimo, the author created, according to some information, from memory, using rumors and impressions of people who saw Suvorov. Alexander Vasilyevich refused to pose, citing employment.

The artist specifically refused to image the character in full growth – it allowed to transfer the viewer’s attention to the personal qualities of the person depicted, without being distracted by the parade attributes corresponding to the status of an important person. The reduced size brings the person Suvorov as close as possible to the viewer, allows you to better understand him, to feel the mood, thoughts, feelings. The author was amazingly deeply able to convey the inner essence of a brilliant commander.

In the portrait, Suvorov appears to the public in an unusual shape. Numerous descriptions of his appearance, left by contemporaries, permanently fixed in memory of descendants recognizable features: short stature, thinness, swiftness in movement, a perky tuft of hair, a sword on his side, and parade standards on his head.

Levitsky shows another Suvorov. An elderly man in a traditional wig, jacket, tied with a sash, is looking at the viewer from a portrait. On the chest – the only order of the huge number of awards granted to the great commander in different countries of the world. On the side, in the right corner of the canvas, a sword is slightly noticeable – the only attribute that gives out the character’s military “specialty”.

Levitsky’s generalissimo is a middle-aged man who is beginning to gain weight with an attentive, intelligent look. Suvorov’s eyes are extraordinarily attractive. They read the feelings of a person who has lived a lot and survived a lot. Despite his greatest military talent and worldwide fame, Alexander Vasilyevich remained an ordinary person who conscientiously performed the work he served.