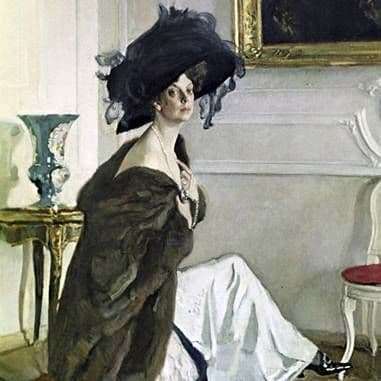 The contemporaries of the artist reacted differently to this portrait. Some have charged that Serov is not just unfair to his model. They found a certain sarcasm in this picture. The artist managed to capture the true truth about the modern world to him. The artist deliberately chose a high horizon. Already this he significantly diminished the dignity of the model itself. We seem to be above it and look at it from somewhere above. This significant effect is also significantly enhanced by a small chair height. The spectator sees and feels that it is absolutely uncomfortable for the princess to sit on it. The pose becomes unstable, tense.

All this is reflected in the facial expression of the heroine of this canvas. Contemporaries said that Orlova preferred expensive toilets. Serov decided to use this in his own way. He deliberately portrays the model in all its glory. We see a luxurious hat, a sable coat, fashionable neckline in those days, a large pearl thread and patent leather shoes. But this magnificent outfit makes a very strange impression on us. One gets the feeling that these things are driving Orlov into a corner. Huge hat, as if rests on the frame. It seems like an instant, and it falls right on the porcelain vase standing in the back.

The foot in pointy shoes is raised very high. It seems that she is like cutting the leg of a chair. Fur coat, as if revived. He is very worried and wants to quickly run away to expose nudity, which can be guessed intuitively. The princess looks at us haughtily. She frantically clung to the manta and seeks with all her might to preserve the elegance of the pose. Her hand, entangled in a pearl thread, points to her. It seems like an instant, and the pearl necklace will burst. The same gesture is repeated in the picture that hangs in the background. Most likely, it depicts a plot on the theme of the Bible.

The viewer begins to unwittingly compare these two pictures. The result is not in favor of Orlova. This place is indicated to her below. Characteristics as merciless as possible. This is some kind of mouse. Tucked into a corner, not the goddess of beauty in luxurious furs.