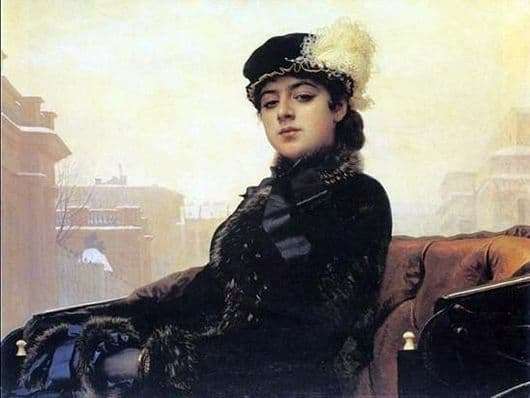 Kramskoy is a very famous artist, who has famous and unusual works of art. For example, one of his most famous masterpieces is a painting titled “Portrait of an Unknown.” This work is full of mystery and mystery, this is its peculiarity. The portrait is fraught with some intrigue. The mystery of this canvas has been preserved to our times, and no one can completely unravel the idea of ​​a portrait of the unknown. It is very often possible to hear how this picture of Kramskoy is called – The Stranger Painting. Nevertheless, such a name cannot be considered true and correct. Because it is the artist who can set the rules associated with his work. And Kramskoy called this work – Portrait Unknown.

Although the words are unknown and stranger are quite close in meaning, however, there is a definite difference. At all times there were artists who painted portraits of women about which they did not want to reveal the whole truth to the public. They tried to hide the heroines of the works. But still, after a while the truth became apparent.

For a long time it was impossible to keep all this secret. But as for the Kramskoy portrait, everything is different here. Kramskoy never revealed the name of his heroine to anyone in his entire life. Apparently, he set himself such a goal, to raise many questions from his contemporaries. What were the guesses built by the people of that time? Some assumed that the girl that the artist had depicted was not attractive in appearance, and therefore Kramskoy hid her. Someone thought that the heroine was a lady of the highest ranks, and expected from Kramskoy silence. And others learned in nature, the famous actress of the time from the bohemian theater. But these are only guesses, which are not facts. Whatever the artist depicted, the portrait was so magnificent that Kramsky was carried in his arms, with delight, when they saw this in his work. The work was just charming and extraordinary beauty.

When Kramsky began to fall asleep with questions, he did not answer any of them. Who is this lady, did he write from nature, maybe the heroine was invented? No, the writer did not consider it necessary to answer. A portrait of an unknown artist created in 1883. He depicted the heroine in an open carriage, and against the backdrop of a beautiful city, St. Petersburg. The stranger looked like an imperious, impregnable lady. The dark beauty, coquettishly narrowed her eyes, proudly casting her gaze, on a walk along the Anichkov bridge. The mysterious heroine looks at the visitors of the Tretyakov Gallery with a majestic and mysterious look.