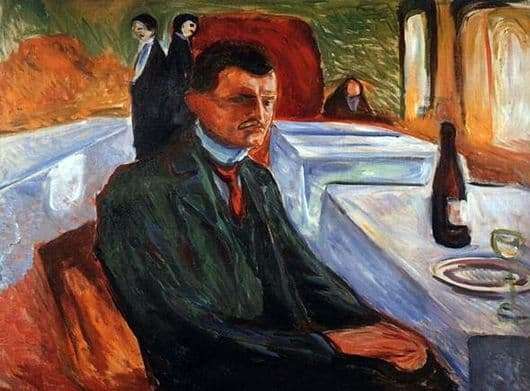 And here is Munch in front of us. Yes Yes. This is the same artist who portrayed for us the “Scream”, which became the most frequently stolen masterpiece and no guard can keep this canvas in any walls of the museum, even in a safe. The “cry” was stolen everywhere and even forged, and only thanks to the vigilance of the experts, they found a fake in time and saved the original.

On the canvas that same Munch. Take a closer look at him, he’s some kind of sullen here and most likely waiting for dinner. Somewhere far away from him are the waiters who are in no hurry to serve him, and he is waiting. And someone also sits in the corner and waits when they take an order from him.

Munch portrayed himself not gloomy, but tired. Too long and too much time he spent on it to establish itself in the status of the artist, which everyone is talking about. They talked about him, but precisely because of the scandals around his canvases. The same “Scream” angered some critics and they screamed foaming at the mouth that he had no place in the Academy of Arts, but he didn’t really go there.

In principle, he needed only one thing – recognition of his creative ability and the opportunity to earn money for his family. In principle, normal aspirations. But as if it were a sin, it didn’t worry the public much, and she often listened to the opinions of critics, which didn’t please artists and Munch as well.

Self-portrait turned out superficial. He only identified the features of his face and did not particularly draw the details. The main thing in this self-portrait eyes and hands. The latter are folded on his knees and slightly compressed. This is not despair, this is patience. He patiently waits for him to be served dinner, he has already drunk some wine.

The background is also very schematic: rows of tables with white tablecloths, multi-colored walls and windows. And the faces of the figures in the background are not visible at all. So focusing all his attention on himself, he didn’t draw a detailed district. And this is probably the most accurate and accurate self-portrait of the artist.