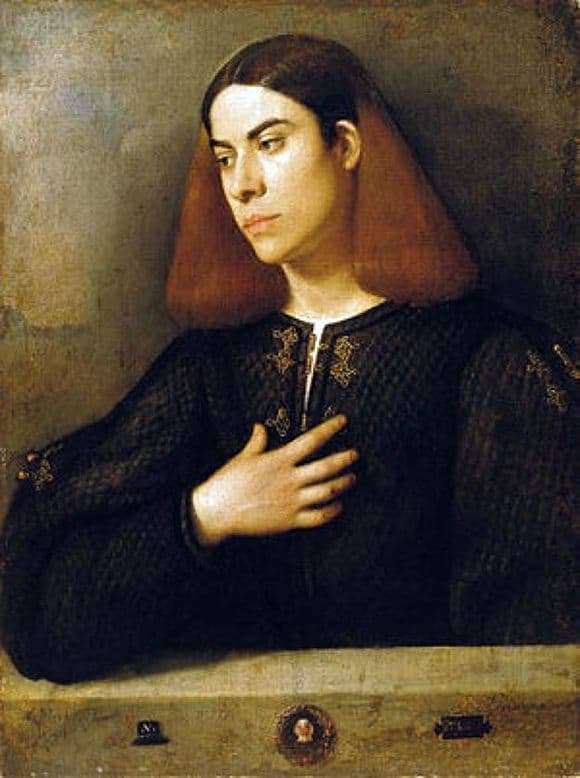 Full of unsolved mysteries, a picture of Barbarelli da Castelfranco Giorgione “Portrait of a Young Man” is not at all like typical portraits of the Renaissance. A characteristic feature of portraiture of the Renaissance is, above all, the direct gaze of the person portrayed to the viewer, the emergence of a sense of “pursuit” of the posing viewer model from all points of view.

On the contrary, the young man, frowned out in a painting by Giorgione, lowered his gaze, which creates an indescribable atmosphere of melancholy, existential sadness. Acting on the “emotional receptors” of the viewer, the artist writes an amazing image of a young man who attracts the views of viewers.

The ideal person in the prevailing representation of artists of the Renaissance is depicted in this portrait, at the same time his atypical, non-standard appearance and manner are striking in their boldness.

The famous method of “smoothing the forms”, blending the contours – sfumato, invented by Leonardo da Vinci was used to paint this portrait, the whole canonical image of a young youth is very soft, evoking a feeling of lightness. The study of the picture by X-rays showed that the original look of the young man was aimed at the landscape that serves as the background of the picture.

About the origin of the painting was not a little controversy, just as it was not easy for the community of artists and art historians to determine the identity of the portrait. According to one of the versions, someone named Antonio Brokkardo posed for the “Portrait of a Young Man”. According to another version, the portrait depicts Vitorio Capello – this is indicated by the presence of the letter “V” on the hat.

Some doubts arise when analyzing the authorship of this portrait. Brush Giorgione questioned by attributing the creation of a picture of one of the artists-followers of the Venetian school.