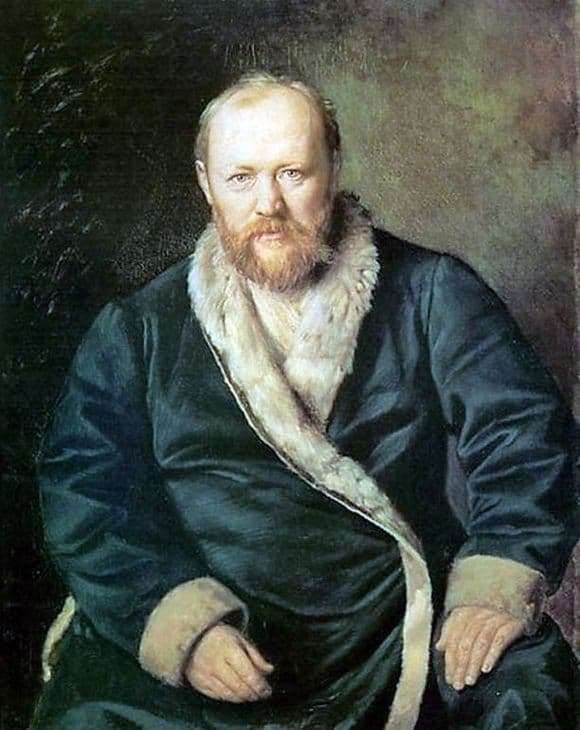 “Portrait of the writer A. N. Ostrovsky, written in 1871, is considered the most successful and realistic portrait of Alexander Nikolaevich Ostrovsky. Perov always managed to feel the subtle soul nature of man and portray him in the best way.

V. G. Perov depicted sitting on the chair Ostrovsky. The background of the picture is the usual brown wall. Alexander Ostrovsky himself is sitting in his dressing-gown. Warm fur on sleeves and collar. Such details make it clear that Ostrovsky is at home.

Vasily Grigorievich Perov paid great attention to his face and eyes. After all, he believed that only eyes can convey the mood and feelings of a person. Ostrovsky’s eyes in a portrait of light blue. Light falls on them, and they seem to glow. By a look it is possible to understand that Ostrovsky is a difficult person. On the one hand, he is a soft and fluffy man, but, on the other hand, there is in the eyes of some kind of strength and power.

The hair and beard of a writer of reddish hue. Only on the head visible gray strands. The whole picture is made in warm colors. From light red to dark brown. A bright spot in the picture, of course, is Alexander Nikolaevich himself, on whose face the light falls on the left side. His “home coat” practically blends with the background of the picture, only the fur on the sleeves and the collar is clearly visible. And the very pose of Ostrovsky stretches to the light.

The playwright leaned forward slightly so that the light fell on his face and hands. It seems as if the character froze for a second, and now he will rise and give a loud speech or read the next creation.

The picture has a size of 105 cm by 80cm, painted in oil. “Portrait of the writer A. N. Ostrovsky “is the State Tretyakov Gallery. And what is interesting, Tretyakov specifically asked to write such a picture from Vasily Perov.