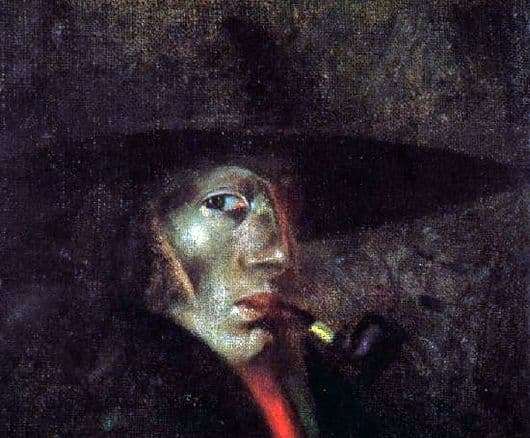 This is the first self-portrait of the great genius of surrealism – Salvador Dali. A grim man gazes at us from the canvas with an expression of doom in his eyes. The artist wrote only the face and the fun. But it is already possible to guess from many of his features.

The general background of the canvas is very dark, among blackness, the face is practically the only distinguishable subject, but he also wrote in rather dark tones, with a large number of transitions and partial shade.

The face is written using olive and brown colors, the silhouette of a black wide-brimmed hat shows through. We see that the line of the shoulders denotes a scarlet shadow, and he depicted a pipe in his close, plump, red lips with bright lemon detail. The author’s figure is not turned towards the viewer, he seems to be looking at us, going far ahead. This can be understood in the direction of his gaze, which looks back all the way. But he wants to turn his head, as if everything that happens behind is not worthy of his attention. He will only calmly, cynically evaluate and nothing more. Also, some arrogance can be seen in the style of writing a self-portrait.

The master emphasizes his face with such a specific shade that it seems as if it is covered with gold plating. One gets a steady impression that Dali wants to elevate himself among the general mass, to show what is better than others. Each of his dash symbolizes neglect and superiority to the observer. A sharp, chiseled nose and massive chin speak of stubbornness and purposefulness.

You can see the hypertrophied size of the parts of the face: a very large eye and lips, a large rounded chin. Also, a black hat and a cape can signify the author’s desire to hide, to hide in the darkness that absorbs him, of general mediocrity. But he, thanks to his talents and originality, is not capable of this.