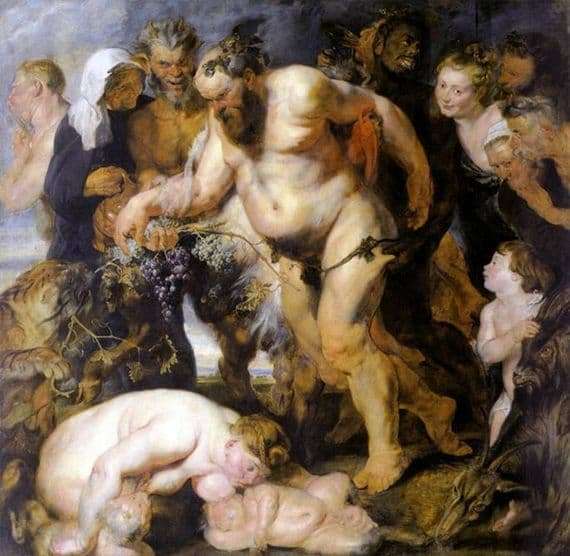 Works written by the famous Flemish artist Peter Paul Rubens are attributed to the Baroque painting. One of the most famous works of the painter is the image of Silenus. This picture is also called “Drunk Silenus”.

In Greek mythology, Silenus was considered one of the rural gods. He appeared to people in the form of a cheerful old man, drunk, but at the same time very wise and possessing the gift of prophecy. Therefore, in most of the paintings he was depicted as drunk, lounging on his back or supported from both sides. He could also be depicted in a cart pulled by donkeys, but certainly drunk, happy and contented with life.

In his picture, Rubens also portrayed Silen drunk, unable to move independently. He is supported by a satyr who helps him to stand on his feet. All this takes place surrounded by beautiful nymphs, small cupids and Menadas (the beautiful admirer of Dionysus). In his work, the painter wanted to display the earthly beginning, emanating from nature, fertility and cheerful noise. And he did it very well.

The work is supported by the noisy atmosphere of bacchanalia. The faces of the nymphs and satyrs are cheerful and contented. A delicate sprig of ripe grapes, as the main source of wine, symbolizes celebration and festivities. The picture is different sketchy free technique and variety of color. At the same time, the whole variety of colors and shades unites into a single golden stream, reflecting on the one hand the movement of the human body, and on the other hand – the air masses.

A talented artist in his work portrayed the mythical gods of the elements and fertility, a rich harvest that engendered the natural principle of humanity as lovers of holidays, festivals, fun. They act as a symbol of endless noise and vitality.