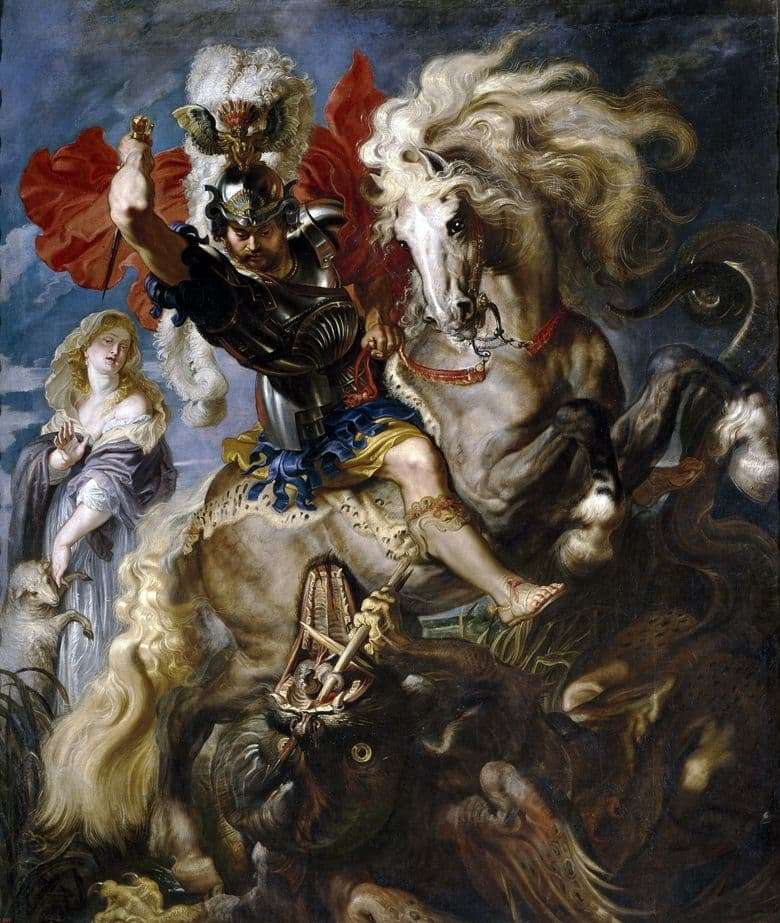 Depicted in the picture of St. George the Victorious embodies the defender of the entire Christian world. According to the legend, in one city, an evil king ruled who despised all Christians. He decided to feed all the children of the city to a huge dragon living near the settlement. The inhabitants of the city protested, because even this king had a child. The king, deciding to appease the people, agreed to give the dragon and his daughter when her turn came. Father dressed his only heiress in the most expensive and beautiful clothes and led to certain death.

In this picture we see the moment when St. George came to the aid of the unfortunate girl. The male figure is depicted on horseback. These are the two central images of the picture. The terrible animal reared, the long light mane of the animal develops in the wind. George is wearing military armor. His image is very dynamic, a little pretentious, bright.

At the bottom of the picture, a dragon appears before us. This is a huge, dangerous animal with wings, tail and a terrible toothy maw. Peter Paul Rubens depicts a small cross, consisting of sharp pegs that pierce the mouth of a dragon. This image is very symbolic, because after defeating the dragon, St. George converted almost the entire city to Christianity.

In the background is the image of the princess, who was to become a victim of an evil dragon. The girl is shown frightened, but she continues to watch the monster die. Near the girl the creator decided to portray the lamb. Thus, the artist wanted to show us that a girl sentenced to death is as gentle and humble as a lamb.

All work is saturated with incredible dynamics. It seems that the artist managed to photograph the most important moment of the battle. The horse reared, St. George raises his sword over his head to hit them with a terrible dragon.