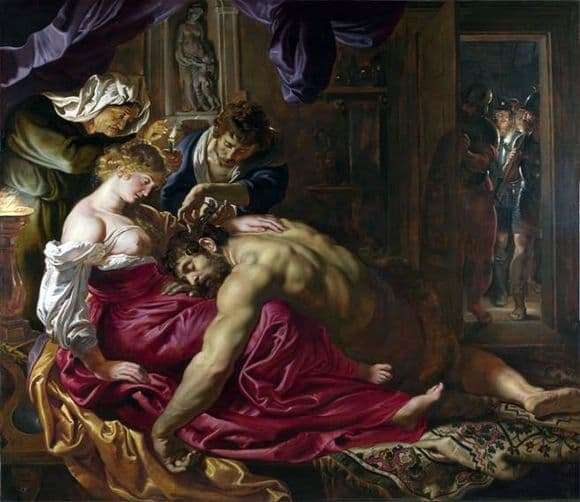 Under the influence of works by Italian artists Rubens created works on religious themes. On the canvas “Samson and Delilah,” written around 1609, depicts one of the biblical episodes. The author finds the characters as historical subjects, without putting religious meaning in them.

Samson, born and raised among the submissive insults, humiliations and disgrace of his people, takes revenge on the enemy, committing mass bloodshed of the Philistines. After making a vow and devoting himself to the Almighty, he grew long curls that gave him strength. However, the Old Testament hero was the victim of a passionate love for the cunning Dalila, who had promised the Philistine authorities for some rewarding to find out what Samson’s unimaginable omnipotence.

In the foreground are four brightly lit oval faces. Samoson falls asleep on Delilah’s lap, who watches as a Philistine standing next to him cuts off his curls – the main source of strength. Another character involved in the story is an old woman who is absent from the plot of the Bible: the author refers to the fact that events occur in a brothel.

The artist displays human passion and future bloody events with the help of the predominant burgundy color in the dress of Delilah. And the army of soldiers standing in the doorway with a different instrument for blinding, symbolizes that Samson in the near future is waiting for something terrible. In the background is a large statue of the Roman goddess, partly repeating the pose, the tilt of the head of Delilah. It is important to note that the bare chest symbolizes passion, lust, which the author portrayed so vividly.

The background of this canvas is rather gloomy, made in dark shades. The light falls only on the faces of the characters, as if highlighting and emphasizing them. The color scheme conveys the mood, setting and character of the picture.