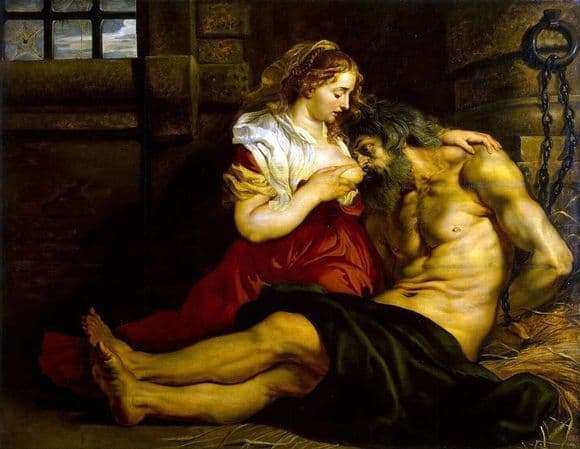 Rubens – singer in the age-old love of life, the depth of its manifestation that does not recognize a framework convention and stupid rules imposed by individual company. He, paradoxically, also views the plot of the “Father’s Love of the Roman Woman” through the prism of his perception of the world.

… The father of a young Perot was imprisoned for a crime that cannot be named after years. Since he was a man of high class, he was not fed to the beasts and not hanged, but decided to give him a “quiet death” from hunger, and his daughters were allowed to go after him – wash, change the straw on which he slept, entertain him with conversation. Distressed by the fate of her father, she, who had just recently given birth to a son, began to breastfeed the old man; for her, it was the only way to maintain his strength.

When, a few months later, the judges inquired about the fate of Kiron, they were told that the old man was still alive. Having ordered to trace Perot (they thought that she was somehow hiding food, bringing her to the camera), the judges were puzzled by the report. On the one hand, according to the canons of Roman law, breastfeeding an adult was recognized as an act, akin to incest, and therefore subject to the death penalty.

On the other hand, the judges were also people, and the dedication of the young girl, who put her life at risk for the life of her father, touched them. After long meetings, they made a decision: Kiron, together with her daughter, was released.

It’s amazing how simple Rubens shows the climax of the legend. The old man is chained to the wall, lying on the straw. The girl, full-blooded, young, with a businesslike and thoughtful face, feeds him like she must have fed her own little son.

The darkness of the prison cell is around them, but there is no hopelessness or fear for life in the scene. On the contrary, life triumphs, the face of the girl is illuminated by an unknown light from where it comes from, and what is happening does not seem to be either a sin or an unnatural abomination, therefore it comes from the noblest of feelings, mercy.