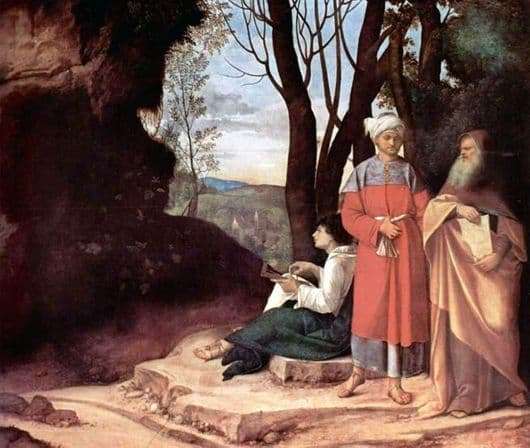 Giorgione di Castelfranco is one of the outstanding Italian talents of the High Renaissance and one of the best students of the Venetian school of painting. Born in 1476, in a small town near Venice. Being a pupil of the eminent Giovanni Bellini, the young talent has absorbed all the richness and depth of his hot color, surpassing his mentor in this. Giorgio was one of the first Italian painters to devote a special place in his work for mythological and religious paintings.

The main theme of his works was, of course, the beloved and beautiful Venice. He inherited the foundations of the Early Renaissance, striving for harmony of color nuances, matching all elements and gradation of lighting. The painting “Three Philosophers” is one of the significant works of the artist. Three men of different age levels depicted in the picture, among themselves are in no way similar either to character or to temperament. Even outwardly, they differ with each other. They are united only by one thing – enjoying the enchanting sounds of nature. The lyrical image embodied in a young man sitting on a stone in a white shirt and a dark green cloak is so unique that it is impossible not to notice the similarity with the author.

Color and composition of colors are characteristic of the style of the master. The three protrusions of the rock on which the characters stand are the symbol of the three stages of the development of philosophy. Two standing figures of men in robes with powerful vertical folds, saturate them with emotions of peace. The dark rock, on the left, harmoniously balances the right side of the picture, where the philosophers gathered. One of the leading roles here is played by a rock and a cave in it, which occupies most of the canvas. It is precisely to her that the glance of the young man is directed, who is closest to her. However, Giorgione lived a short but rich life, and a year after the presentation of the painting The Three Philosophers, he contracted the plague and died.