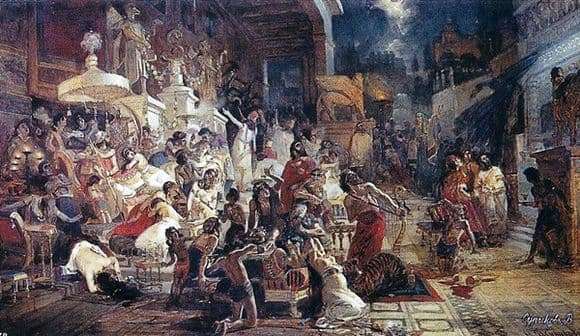 Vasily Surikov was born in Krasnoyarsk in 1848 into a family of hereditary Don Cossacks, who came along with Yermak back in the 16th century when conquering Siberia. The talent for painting manifested itself quite early, but due to the early death of his father, the family did not have the means for a decent education. Only a case helped Surikov when the Yenisei governor Zamyatin saw his drawings, found patron I. P. Kuznetsov, who paid for his studies at the academy, and at the age of 21 Vasiliy Surikov became a student in St. Petersburg.

His monumental canvases, thanks to which Surikov gained fame and fame, are made with a deep compositional, color and plastic approach. Most of the paintings – “Morning Streltsy Penalty”, “Suvorov’s Crossing the Alps”, “The Conquest of Siberia by Yermak” – are filled with a large number of different characters, each of which is worked out

with its own character, moment of emotions, with careful selection of color solutions. And although many of his contemporaries often criticized Surikov for such a “jumble” of faces and bodies, compared his paintings with the “brocade carpet”, it became a distinctive feature of the canvases, his special energy and valuable historical and artistic heritage of Russian culture.

The painting “The Feast of Valtasar” was also made in the artist’s favorite style – the culmination of a significant event in history. Belshtazar, having inherited the rule of Babylon after the death of his father, arranges a grand feast, in which a great number of guests, servants, concubines, priests and slaves drown in wine and vice. When the invitees did not have enough dishes, Valtasar ordered to bring the golden ritual cups, looted from the destruction of the Jerusalem temple.

But only the new ruler of the world touched the goblet, the sky trembled with terrible peals of thunder, lightning lit up a riotous crowd, and a glowing, encrypted inscription appeared on the wall. Anticipating trouble, Valtasar is looking for someone who could read the fatal message, and the prophet Daniel is brought to him. The picture captures the moment when Daniel translates to the king a mysterious inscription, which predicts a quick death of the defacer of the shrines, pointing to burning signs, and around Valtasar, distraught with fear and fear, many… guests and servants writhe in horror.

Rich bright expensive clothes, decorated with jewels, gold dishes, lamps, furniture – how miserable they look under fire of divine wrath. Red cloaks, red carpets, spilled red wine in the foreground of the picture – all this seems to be a harbinger of imminent bloodshed, because the celebrating king was not in charge of guarding the city, to the walls of which Persian troops crept up. The Babylonian priests still stretch their hands and pleas for protection to the pagan idols, but the outcome of the grandiose and tragic feast is quite clear – the defilers cannot escape the heavenly retribution.