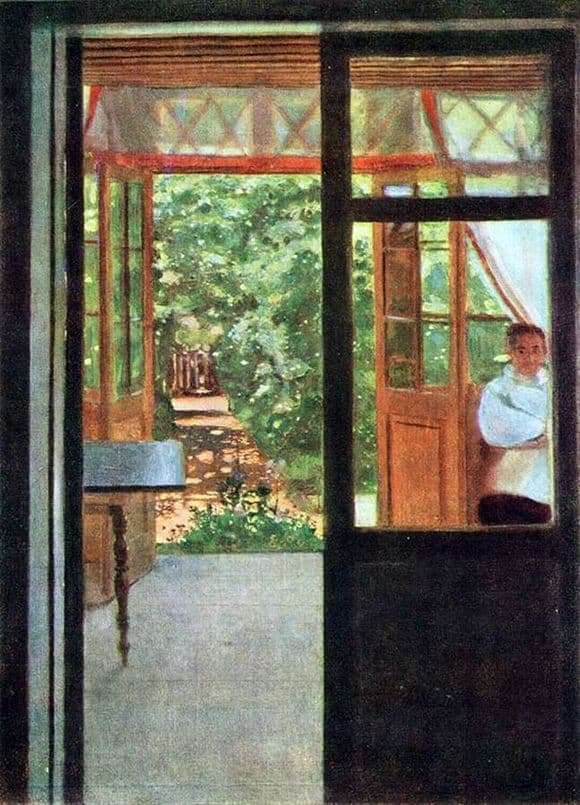 The painting “On the Balcony”, owned by the famous Russian painter Konstantin Andreyevich Somov, was painted in 1901. The canvas is painted with oil paints in the style of symbolism. At this time, the picture is part of an extensive collection of the State Tretyakov Gallery.

The picture is written in an interesting interior manner that allows you to look at it as if from the side, which, in fact, the artist does. In the foreground of the picture, the viewer sees the usual gray door, one half of which is open, and most of the second is occupied by a large window. This door, apparently, symbolizes the discovery of new life paths, a window cut through to the bright world of the future.

And indeed, the world that opens behind the door is beautiful. The viewer is presented with a clean and comfortable veranda of an ordinary rural house. Behind the door in the left part of the picture one can see part of the dinner table, in the right part of the canvas, half hidden by the door, one can see a man dressed in a white shirt and black pants. He leans against the wall, behind him, his arms crossed on his chest, his eyes fixed on the artist.

In the background, the picture is another door, this time wide open and inviting to the street, where the viewer is presented with a garden path, immersed in the rampant green of the garden. Right behind the threshold you can see a few weeds. The weather is sunny outside and the fact that the balcony seems even brighter than the artist originally intended.

The picture depicted on the canvas is quite ordinary, there are no spiritual delights in it, it can be easily copied from any villager’s balcony. And yet, there is in all this a certain charm.

The canvas reminds the viewer of warmth, summer, sunlight, calls on nature, in forests and fields, offers a break from the heavy urban routine and just stand on the balcony next to this relaxed person.