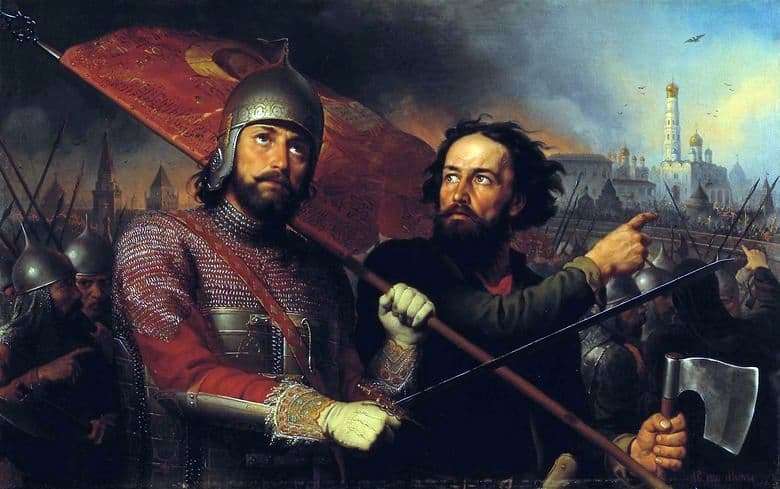 The Russian state of the late 16th – early 17th century is marked by events that went down in the history of the country as the Time of Troubles. The political and economic crisis of the country gave rise to a lot of clashes, both internal and external – a series of riots, invasions with invasive objectives, natural disasters, all this brought the state to moral and physical exhaustion. Yes, there were tragic moments, but they, as a rule, give rise to heroic deeds.

One of such heroes is, by right, the Novgorod district warden Kozma Minin and the famous military leader Prince Dmitry Pozharsky, who liberated Moscow from the Polish interventionists. These two figures significant for history in their picture were perpetuated by Michael Scotty. The canvas “Minin and Pozharsky” is included in a triptych, the remaining 2 paintings of which also tell us about the events of that dark time.

This work of art is well known, as almost everyone saw it in school history textbooks, in the section of culture. It was written in 1850, on impressive canvas sizes. Heroes are depicted standing side by side to each other, in poses as if frozen in a theatrical production, Pozharsky holds a banner, faces are made like images of ancient heroes – beautiful and with regular features.

In the background is the militia, which, under the leadership of Minin and Pozharsky, is about to free the Moscow Kremlin. Absolutely two people of different origin – one descendant of Rurik himself, the second simple elder. Both believe in the success of their business and know their goal – the liberation of the capital from foreign invaders.