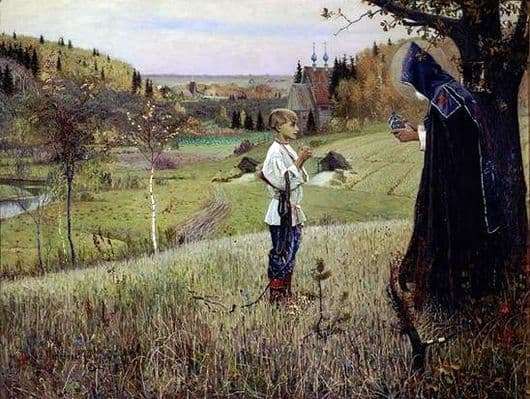 Nesterov was well acquainted with the circle of philosophers. In 1910, he attended the religious-philosophical meetings of the society named after V. S. Solovyov. The artist also often performed church paintings. Until the Soviet period, religious paintings were an important part of his work. Nesterov wrote a series of paintings dedicated to the life of St. Sergius of Radonezh. Sergius of Radonezh, in the Bartholomewian world, was the founder of the Trinity-Sergius Monastery in Sergiev Posad, and was also his hegumen. Russian religious philosophers considered the Trinity-Sergius Monastery to be the center of Russian spirituality.

The painting Vision to the youth Bartholomew was recognized as the best work devoted to an outstanding Orthodox figure. “The young shepherd Nesterov wrote the figure from life. A girl from Komyakino village posed for him. When the artist saw a girl of about 9 years old, short-haired, with big, surprised, blue eyes, a bit of a painful look, he immediately realized that this was a find for his boy Bartholomew. Also in the village of Abramtsevo, Nesterov painted the landscape for his picture. Creating the look of a miraculous vision, the artist sought to convey as much historical authenticity as possible.

In other words, to create an image that would be perceived as a real hero, a real youth Bartholomew. And he did it thanks to the landscape and the convincing figure of the lad. In the landscape itself is nothing mysterious. In the background, you can even see a vegetable garden with cabbage. The figure of a monk is as close as possible to the trunk of an old oak tree in order to focus all our attention on the boy. From the expression of the face and the reverent posture it can be understood that a miracle occurs in the soul of a young man. Nesterov was a member of the local Abramtsevo circle, which was located on the estate of the patron Mamontov. There he learned a lot about the history, everyday life and the old culture of ancient Russia.