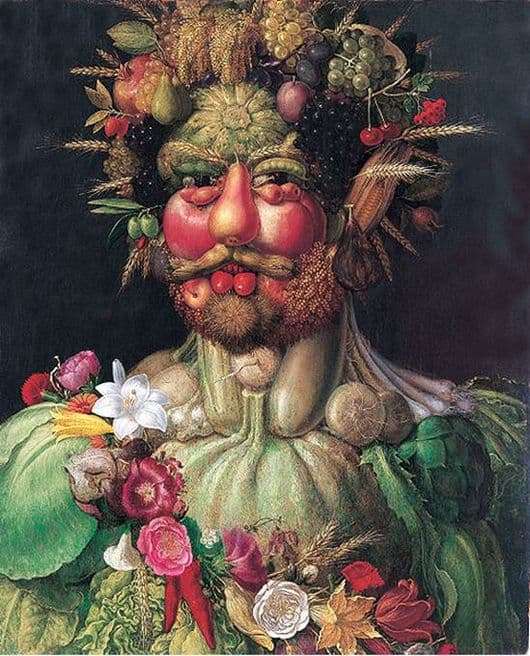 Giuseppe Archimboldo was an outstanding painter and decorator from Milan, as well as the grandson of the Archbishop of Milan. The artist lived in Italy of the 16th century and served the Habsburg dynasty in Bohemia and Austria, and during the reign of Ferdinand I in Vienna, he was appointed a portrait copyist. Later, when the eldest son Ferdinand I, Maximilian, inherited the throne, he became a court painter. He knew a lot about the benefits of products. He painted many paintings created from vegetables and fruits, of which he also created portraits of people. This portrait depicts Emperor Rudolph II in the form of the god of the seasons and the earthly fruits of Vertumnus, who was known in ancient Italy. Vertumnus was a god of transformation, a metamorphosis of natural abundance.

This work by Giuseppe Archimboldo is one of the most famous of all the portraits of this emperor, due to the fact that this portrait of an Italian artist represents Rudolph II in the image of the fidgety god Vertumn from ancient Rome, which is composed of different berries, fruits and vegetables. The picture “Vertumn” is a half-length portrait of the emperor folded from a variety of fruits and vegetables that personify the vegetation and the gifts of nature.

This canvas was appreciated by the emperor himself and generously rewarded the painter. A friend of the artist, scientist and writer Gregorio Camanini (Gregorio Camanini) described this picture: His eyes are like the star of Olympus, he called his chest air, his stomach – the earth, his legs – an abyss, and his robes seemed woven from fruits and grass. In the picture of this artist, fruits and vegetables make it possible to embody a certain idea and idea of the master. I would also like to note that this is not the only painting by Giuseppe in which he uses products to create his pictorial images.