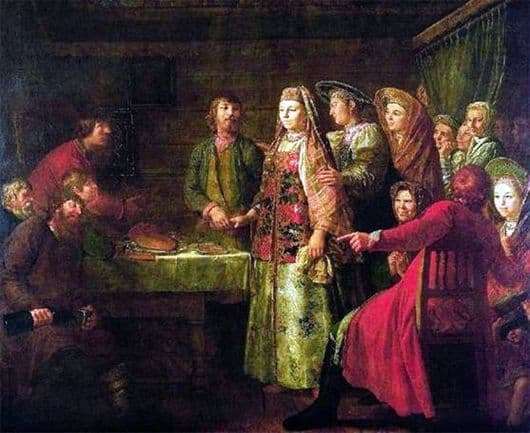 Canvas domestic character “The celebration of the wedding contract” was written in 1777 by Mikhail Shibanov. Thematically, the picture for Russia of that century was extremely unusual. Most of the creations were then written on heroic or mythical plots. But it was an appeal to the life of an ordinary person that attracted the attention of art historians and critics.

The role was also played by the motive of the old Russian culture and folk tradition, history that often occurred five hundred years ago, as well as the most interesting multi-figure composition and emotions on the faces of the characters in the painting – the same ordinary people as you and I, as the same art critics who lived both now and then.

The canvas depicts what the title says. This is really a celebration. Some women in richly decorated sundresses and kokoshniks, men also dressed up. On all faces shine joy and happiness for the groom and the bride, utterly embarrassed. The event according to the folk tradition is usually accompanied by the exchange of gifts while the bridegroom arrives to the bride.

If he agrees to marry a damsel, a wedding contract is concluded that cannot be broken. So the bride’s embarrassment is natural: this is one of the most exciting moments in her life. Her future husband is frankly happy. He stands in an elegant caftan beside her and smiles, holding his bride by the hand. These two people have a central place in the picture, so they can definitely be called the main characters.

Obviously, Shibanov captured a moment of great fun. On the table there are dishes, one of the men is about to pour a drink for himself, some kind of curious girl peeks out from behind the curtains, and relatives on both sides rejoice and are touched, they admire the bride. That is why art critics note the subtle psychologism of the work and the skill of the artist.