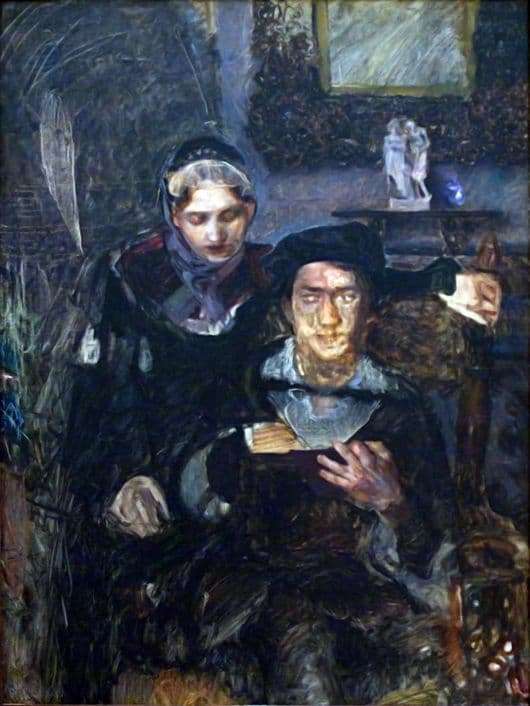 The picture of the famous artist Mikhail Vrubel “Hamlet and Ophelia” was written in 1884 during his student days. Now the canvas is stored in the Russian Museum in the city of St. Petersburg.

In 1883, Repin invites Vrubel to write a more serious picture. After a long search, as a result, the artist stops his choice on the stage from the play “Hamlet and Ophelia”. The plot was taken reflections with elements of tragedy.

In the created figures, Vrubel displayed two different characters and temperaments. He showed two opposites. Characters are a contrasting background for each other in the depth of their experiences.

A year after the meeting with Repin, the master embodied his creative idea. The picture was drawn on paper using pencils and watercolors. In the artist’s imagination, the Danish prince was seated in a chair. That is how he was depicted in the figure.

The interior of the room in particular does not attract attention. The image of Hamlet is permeated with concentration and a certain detachment. His gaze is directed to the side. It seems that the prince is deep in thought and turned away from the outside world. The artist depicted a young man with large and strict facial features.

Another figure is shown beside the prince. This is Ophelia. Her image is sad. The drooping look, half-closed eyes speak of her sadness. At this moment, she seems defenseless and contrite. The girl gently leans over her beloved, one hand down on the back of the chair. She seems to be trying to penetrate his thoughts.

In the overall color scheme of the pattern is dominated by dark shades and even black. Thus, the artist strives to convey to the viewer the atmosphere of tragedy. The center of the composition is only two characters. There are no details. Therefore, all attention is concentrated on the depicted figures, shrouded in dark reflections.